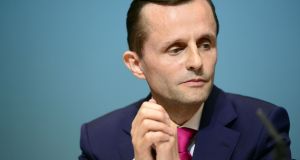 There are “striking similarities” between the findings of the Elliott report into Scouting Ireland and those that emerged from the Ryan and Murphy reports into clerical child sexual abuse, solicitor and leading child law expert Dr Geoffrey Shannon has said.

He was speaking following the publication of the report, commissioned and published by Scouting Ireland on Thursday into historical child sex abuse that took place in legacy scouting organisations. The report was compiled by child protection expert Ian Elliott.

Mr Shannon said his “first thoughts” were with the victims of abuse perpetrated by individuals connected with the organisation.

“The report is profoundly shocking and deeply disturbing,” he said. “A striking feature of the findings is the invisibility of the young people who were abused and the reckless disregard for their welfare.

“The legacy of the organisation’s shameful indifference towards children is illustrated in this important report.

“I acknowledge that Scouting Ireland is a very different organisation today and has made significant improvements in its child protection policies. It is important, however, that those who perpetrated abuse are held accountable in accordance with fair procedures and natural justice.

“There are striking similarities with the findings that emerged from the Ryan and Murphy reports. The findings underscore the importance of mandatory reporting introduced in the Children First Act 2015.”

Mr Shannon noted comments in the report that a more comprehensive investigation would run into difficulties due to the lack of records.

“That said, it is important to examine further whether an independent inquiry would generate additional information,” he said. “Any such inquiry should be independent, prompt, effective and transparent.”

“This report tells us how sex offenders dominated the senior levels of the scouting organisations who worked to silence survivors, and protect perpetrators,” she said. “This arose from serious weaknesses in governance and accountability over sustained periods.

“These failures have caused considerable harm to generations of young people and the apology is very much warranted. However, while this report speaks to the past its lessons are for today.

“Keeping children safe requires all organisations to commit to substantial and continuous investment in its child protection infrastructure which includes good governance, transparency and accountability.”

Survivors group One in Four today said the report documents “a devastating history of serial sex offenders abusing young boys, protected within two seriously dysfunctional scouting organisations from the 1960s to the 1990s”.

One in Four chief executive Maeve Lewis said: “Our first thoughts must be with the hundreds of survivors who were let down by the scouting volunteers and leadership who ignored serious allegations of sexual abuse, often made by several boys or their parents.

“The pain and suffering they have carried into their adult lives is very real, and they are deserving of the most expert independent support. Where the perpetrators are still alive, every effort must be made to bring them before the criminal courts.”

“Active abusers rising to leadership positions supported by other abusers, protecting and supporting each other through a culture of cronyism. Non-offending leaders actively suppressing the reporting of concerns through a desire to protect the good name of the organisation.

“Ian Elliot cites a lack of awareness of the challenges at board level, a culture where there is still evidence of efforts to frustrate the process of holding people accountable and inappropriate deference to leadership to this day.

“He makes many strong recommendations for actions which will be necessary to transform Scouting Ireland into a youth organisation where children will be safe. It is important that those actions should be monitored by a team of independent experts on an ongoing basis.”

Covid-19: People in rural areas should be allowed travel further than 5km - Minister 18:24
Coronavirus: A further three deaths and 47 new cases reported in the State 18:11
Swann says cross-Border cooperation on tracing is ongoing 17:39
Two men charged with facilitating alleged attempted murder of Christy Keane 17:30
Government Minister expresses horror at death of George Floyd in the US 17:28