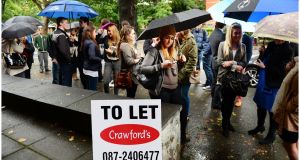 People renting a room in someone’s home have almost no rights and are among the most vulnerable tenants in the State, housing experts have warned. File photograph: Bryan O’Brien

People renting a room in someone’s home have almost no rights and are among the most vulnerable tenants in the State, housing experts have warned.

They are calling for minimum standards to be applied to Rent-a-Room scheme arrangements, the mandatory registration of such lettings and the extension of tenants’ rights to those in the sector.

They are also seeking adequate legislation to stop overcrowding in houses.

The call comes amid increasing instances of seriously overcrowded housing and obstacles faced by tenants in dispute with landlords when they are sharing their home.

A shortage of housing supply and unaffordable rents mean renting a room is an increasingly sought-after option.

According to the property website daft.ie, the average rent for a double room in Dublin increased by 16 per cent between January 2015 and December 2016, from €541 to €627.

Renters taking up these options, however, have very few rights. Anyone letting a room in their home is “not covered by landlord and tenant legislation”, according to the Citizens Information website (citizensinformation.ie).

“You are not obliged to register as a landlord with the Residential Tenancies Board, provide a rent book . . . or ensure that the accommodation provided meets any minimum physical standards.”

Anyone renting a room in their landlord’s home is not actually a tenant, but a “licensee”, according to Citizens Information.

“This means you are in the property by the landlord’s consent or invitation. As a result, you cannot avail of the type of protection that tenants are entitled to under the residential tenancies legislation,” it says.

“Any notice you may get of the termination of the tenancy is at your landlord’s discretion . . . You cannot use the RTB’s [Residential Tenancies Board’s] dispute resolution service . . . You are not protected by the Equal Status Acts 2000-2015 which prohibit discrimination.”

An RTB spokesman said its “hands are tied” when it comes to people renting rooms.

A Revenue spokeswoman said a person letting a room should declare the income in their tax returns, but agreed that if they were getting less than €14,000 a year they would not have to.

There was no way of knowing how many people were letting rooms in their homes.

John-Mark McCafferty, chief executive of Threshold, said this was a “hidden and growing sector of the rental market.

“It defies belief that there are almost no regulations for this sector.”

He said there should be minimum standards as well as regulated rights and responsibilities of tenants and homeowners in the sector.

Mr McCafferty also pointed to the lack of adequate legislation on overcrowding.

“It is the generally the most vulnerable who end up renting in this sector, who may have very little English and be on low incomes,” he said.

“They are likely to be in precarious situations, made worse by precarious housing. ”