‘Twice as many’ empty homes in Ireland as a normal market

Country has just over 2m dwelling units, equating to one unit for every 2.35 people 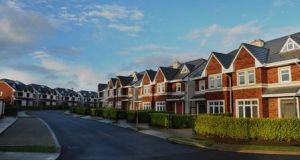 The Republic has just over 2 million dwelling units for a population of 4.75 million, translating to exactly one unit for every 2.35 people. File photograph: Getty Images

The number of vacant homes in Ireland is at twice the level of a normal functioning marketplace, a conference heard on Tuesday.

Today, the country has just over 2 million dwelling units for a population of 4.75 million, translating to exactly one unit for every 2.35 people.

However, the Joint National Housing Conference at Dublin Castle heard the country had a vacancy level of 12.8 per cent, well over the 6 per cent expected in normal conditions.

Those vacancy areas are found at the lower end in South Dublin (4 per cent) and at the higher level in Co Leitrim (30 per cent).

‘Why is there a housing crisis?’

Presenting that statistical overview, Seamus Hanrahan, senior project manager at Limerick City and County Council said: “With those kind of figures you would have to ask yourself: why is there a housing crisis?

“Things are never as simple as that. And vacancy has a key role in the under-utilisation of the housing stock in the State.”

Today, he pointed out, there are 198,358 vacant dwellings in Ireland.

Speaking after his closing address to the conference, Minister of State for Housing Damien English said: “It is a crazy situation that we have so many vacant properties and so many people who actually need a home and we have to match that up.”

He said there are a range of options to close the gap, particularly through local authorities who have been given resources to lease and buy houses, and to engage owners in repair and lease-back arrangements.

The Government has provided funding of €140 million over five years to assist property owners and local authorities to bring vacant dwellings into use for families or individuals on local authority waiting lists. It will be piloted in Carlow and Waterford.

“We have asked all local authorities to go literally street by street, estate by estate, to identify the vacant properties,” the Minister said, adding that more data was due in coming weeks on identifying what types of units are not in use.

Much of Tuesday’s conference dealt with the subject of urban renewal.

“If you want to see what the impact of a Liffey Valley [shopping centre] is, look at the impact of Dundrum on Dún Laoghaire. [The main street] is a dead place and it will remain dead - and it is going to fade.”

Mr Kelly argued the entire planning system needed to be overhauled, particularly the zoning model, and pointed to Florence, Italy as a paradigm of a city where tradespeople worked in the same areas where people lived.

Green councillor Ciaran Cuffe, a qualified architect and lecturer in urban regeneration, said he was concerned some of the planning mistakes of the 1960s and 1970s could be repeated, specifically in terms of social segregation.

“I continue to be really concerned as to whether current housing policy is polarising where people live in the 21st century,” he said.

He mentioned the prospect of “well-meaning” developments in towns which house local authority tenants, but where “those who have the money and the ability simply leave and live five miles away and send their kids to the schools where they will mix with kids from a very different social background or class if you call it that”.

“For far too long we have had massive segregation in housing policy - and I am worried that that will happen again.”