‘I understand why people, including clergy, take their own lives in situations like that’ 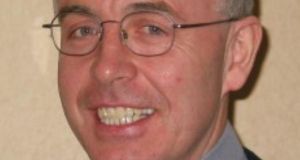 Fr Tim Hazelwood who was falsely accused of abuse: “As a priest everything revolves around your good name. The shame is a huge thing. Shame, helplessness and powerlessness”

In his victim impact statement to the courts in Dublin a priest, falsely accused of raping a child, said he would have preferred to have been shot through the head than go through what he had since the allegation was made.

He had to stand down from public ministry, leave the presbytery where he had lived for years, and deal with rumour, and rumours of rumour.

The priest, who was not named in court proceedings but who was, and remains, deeply respected in the archdiocese, made his impact statement at the trial of his accuser who was jailed for four years in 2007, reduced on appeal to three years.

In June 2003, Paul Anderson made a statement to gardaí at Kevin Street in Dublin, falsely accusing the priest of indecent assault and buggery between February and May 1981 while being prepared for First Communion.

The priest said his ordeal had given him “a deeper insight into the mind of Christ” who had also been falsely accused. “And since his standard of forgiveness was ‘70 times seven times’ then surely I must be able to find it in me to forgive Paul Anderson – which I now do – and I do so wholeheartedly. So may I sincerely ask that this be taken into merciful consideration by the court when sentence is being passed,” he said.

Fr Tim Hazelwood, parish priest at Killeagh in east Cork, has had more recent experience of such as ordeal. For him, it began in March 2010 when the child protection officer of his Cloyne diocese told him an anonymous allegation had been made against him. Despite the anonymity, “my diocese proceeded to inform the police and the health board, giving them my name”.

It was six years before it ended, in June 2016. Then, at the High Court, his accuser signed a detailed retraction and admission that he had lied. He also assigned an apology. Fr Hazelwood’s legal fees were paid and a generous donation was made to a charity the priest nominated.

But the experience has left its mark. “I can’t even read all this McCabe stuff,” Fr Hazelwood told The Irish Times. “As a priest everything revolves around your good name and it’s probably the same with a guard. The shame is a huge thing. Shame, helplessness and powerlessness. How can you prove it’s not true?”

He understands why “people in that situation don’t know how to cope. You don’t know where to turn. I was on sleeping tablets for a year. I found it very difficult to work. There was this whole sense of being totally distressed.”

Just as disturbing was “not knowing who knew” about the allegation “or whether I should say anything, because it might go everywhere”, he said.

He wondered whether friends who might hear of the allegation would believe him. “I asked a few, straight out, to tell me they believed me.”

‘Hung me out to dry’

At the conclusion of his case in the High Court last June, he said that: “While I have no understanding behind the motives of my accuser, my reflections are mainly around my church, which I felt cut me loose, hung me out to dry, disowned me and left me feeling very alone. I struggled between my desire to clear my name and the expectation to lie low and to say nothing, hoping that it will go away.”

Fr Hazelwood was able to identify his accuser who began harassing him with phonecalls and letters. The priest made a formal complaint to the Garda and initiated High Court proceedings against his accuser.

For Fr Hazelwood, the most difficult part was telling his siblings about the allegation. He didn’t tell his 87-year-old mother until last May, just two weeks before matters were concluded in the High Court.

“That was the most upsetting experience, but I was able to tell her it was sorted and I was okay,” he said. “I can understand why people, including clergy, take their own lives in situations like that.”