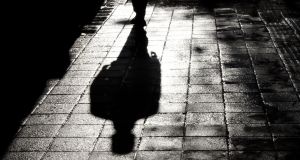 Women’s Aid team has heard reports of women going outside to their car or garden shed to make contact due to a lack of privacy during the Covid-19 lockdown.

Just as domestic abuse victims are being urged to contact services that remain open during the coronavirus outbreak, concerns have emerged that many trapped in their homes are less able to do so.

Efforts are being made to assist them by publicising the ongoing availability of domestic violence services amid the Covid-19 restrictions. On Wednesday, radio, TV and social media ads developed by the Department of Justice and Equality with the collaboration of frontline services highlighted continuing supports for victims.

The Dublin Rape Crisis Centre (DRCC) said it had seen no notable increase in calls but those coming through are now more “intense”.

“Are we hearing about it? We are not,” the organisation’s chief executive Noeline Blackwell said of any rise in domestic abuse experience.

“The volume of calls to our helpline has not increased but what has increased is the intensity of the calls and the sense of isolation that people are reporting.”

Although the DRCC deals primarily with sexual violence, much of the contact it receives is from related domestic abuse.

Ms Blackwell said that, along with other charities, it is concerned any actual rise in incidents of abuse may not translate into calls given the restriction in opportunity to make a phone call.

Contacts to its helpline vary hugely but can typically last between 10 and 25 minutes. Ms Blackwell said that whether due to looking after children, being under increased “monitoring” in the home or a general lack of privacy, opportunities may be severely curtailed.

“This is actually happening with all the help lines as I understand it, in that they are not as busy as people feel they should be. The same thing happens every Christmas.”

It is a concern shared by Women’s Aid, whose chief executive Sarah Benson said her team has heard recent reports of women going outside to their car or garden shed to make contact.

This week, the National Women’s Council of Ireland highlighted that internationally it is too early to see the full impact of the pandemic on gender violence from official statistics. The same applies in Ireland where Garda figures on domestic callouts, court data on applications and the level of calls to charity help lines have yet to emerge.

However there are anecdotal indicators. Ms Benson said her organisation had received reports of men using the coronavirus as just “another tool in a repertoire of behaviour” with examples of some coughing on their victims or refusing to wash their hands even when a partner has an underlying health condition. Some cases of controlling behaviour have escalated to violence.

Women’s Aid has had a “sustained demand” for its services, boosted significantly by a recent Late Late Show appearance. Their new webchat service, negating the need for audible conversation, has also seen a jump in use in recent weeks.

“What our team are reporting to us,” Ms Benson said, “is that there is always stress and anxiety and fear but the level of anxiety and stress with such a pressure cooker . . . is absolutely having a really exasperating impact on people who are walking on eggshells.”

According to the BBC, France initially reported a sharp drop in calls to the national helpline but within a week reports of domestic abuse had gone up by a third. In Spain, another country where severe restrictions were introduced, there was an 18 per cent increase in calls in the first two weeks.

Here, gardaí have specified the priority nature of abuse complaints and the courts continue to process cases under domestic violence law.

The district court is hearing new applications for protection orders, dealing with threats of violence or putting people in fear; and interim barring orders temporarily removing an individual from a home. In cases where safety order hearings dealing with threats of violence are adjourned, interim protective orders are being extended as a tie-over.

However, Ms Benson said she was concerned about a relative lack of legal activity, not because of a drop in demand, but because of difficulties in leaving a domestic setting to pursue a court remedy.

One well-placed legal source said there was no indication of any increase in such court applications but that family law in general was markedly down due to public restrictions.

Jennifer Cuffe, a barrister working in the family law court in Dublin, also said there was no noticeable change in activity other than an emphasis on processing emergency cases.

She said those who needed various orders the most were often those who feared most for their safety – a factor likely to be exasperated by the current lockdown conditions.

“There is always a lot of domestic violence cases, sadly, and there continues to be,” she said.