Coalition of firms and unions calls for regularisation of undocumented workers

Open letter to FG and FF highlights importance of those who are undocumented, many of whom are in frontline sectors 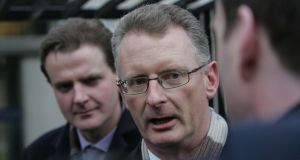 Chief executive of Chambers Ireland Ian Talbot: “We need these workers. We’re very grateful to them”

A coalition of business leaders, trade unions and community groups is calling for the “urgent regularisation” of undocumented workers, many of whom are in frontline essential sectors.

In an open letter to Fine Gael and Fianna Fáil, the main parties expected to form the next government, the 21 national organisations – including Chambers Ireland, the Restaurant Association of Ireland, Family Carers Ireland, the Irish Congress of Trade Unions (ICTU) and the Migrant Rights Centre of Ireland – say “now, more than ever, the Covid-19 pandemic has shown us that we are dependent on each other”.

“Undocumented workers have stepped up and continue to work providing essential services in this crisis. They are working in sectors where Ireland needs workers right now – in elder care, healthcare, retail, cleaning, food processing, agriculture and fishing.”

These workers “remain on the margins”, they add. “Providing a pathway for children, young people and workers who are ‘undocumented’ to regularise their status must now form part of [a] new programme for government.”

A Department of Justice spokesman urged anyone who is undocumented to apply to regularise their status.

“A pragmatic approach is taken in relation to each case, which is considered on its individual merits. Ireland, along with other member states of the EU, has committed, under the European Pact on Immigration and Asylum (2008), to a case-by-case approach as opposed to mass regularisation.”

There are an estimated 15,000 to 20,000 undocumented people in Ireland, providing what Ian Talbot, chief executive of Chambers Ireland, describes as “a very valuable resource to the economy”.

Mr Talbot added: “We need these workers. We’re very grateful to them.”

Among them is Irene Jagoba (45) from the Philippines, who has been here since 2008. She has two children at home, aged 20 and 16, who she has not seen in more than 12 years. However, her work here with a Dublin family, where she is very happy, means she can support them better than she could at home. “Every day is a challenge. You do not know who you will encounter,” she says.

Debra (61), who does not want to give her surname, has been here for 14 years. She is currently “cocooning” with the woman aged 85 who she is caring for. “The lady and her family are so lovely. But I miss my family, and I feel a lot of anxiety, fear. If I get robbed I cannot even report it.”

John Dunne, chief executive of Family Carers of Ireland, said in the context of the current crisis an “emergency scheme to regularise undocumented workers with relevant skills would clearly be in the national interest”.

Patricia King, general secretary of the ICTU, said undocumented workers should be entitled to full employment rights and freedom from the risk of exploitation.