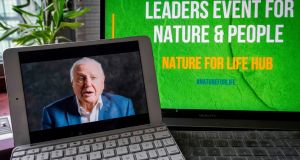 Sir David Attenborough has warned that our planet is in real danger. Photograph: AFP via Getty Images

The Season of Creation is a time set aside each year for Christians to reflect on their relationship with their Creator and the created order. It began on September 1st and ends tomorrow, the Feast of St Francis of Assisi. It originated in 1989 when the Ecumenical Patriarch Dimitrios I of the Orthodox Church proclaimed September 1st as a day of prayer for creation, and today it involves 2.2 billion Christians of many traditions.

The recent BBC television documentary Extinction presented by Sir David Attenborough warned that our planet is in real danger. Since 1970, birds, mammals and reptiles have declined by 60 per cent; insects, on which three-quarters of our food supplies depend, by 10 per cent. The situation “threatens our ability to feed ourselves, control our climate and puts us at greater risk of pandemic diseases”.

Attenborough sees the challenge as a moral one, stating bluntly that we are responsible. According to a recent UN report, “The world has failed to meet a single target to stem the destruction of wildlife and life-sustaining ecosystems . . . From tackling pollution to protecting coral reefs, the international community did not fully achieve any of the 20 Aichi biodiversity targets agreed in Japan in 2010 to slow the loss of the natural world. It is the second consecutive decade that governments have failed to meet targets.”

Martin Palmer, adviser on religion to the World Wide Fund for Nature, believes that faith communities, Christians and others, are well placed to play a major role in rescuing the planet, “given that they own or manage 50 per cent of the world’s schools, a third of hospitals and clinics and 14 per cent of the investment market.” He says that religious people can make a huge contribution, given their resources.

Making a contribution, however, is not an option. It has been an obligation in the Judeo/Christian tradition from earliest times, as we see from an examination of one of tomorrow’s readings.

Exodus chapter 20 lists the 10 commandments, including the familiar words: “Remember the Sabbath Day to keep it holy”.

However, an expanded and probably older version of the same commandment found in chapter 23 reads: “Six years you shall sow your land and gather in its produce, but the seventh year you shall let it rest and lie fallow, that the poor of your people may eat; and what they leave, the beasts of the field may eat . . . Six days you shall do your work, and on the seventh day you shall rest, that your ox and your donkey may rest, and the son of your female servant and the stranger may be refreshed.”

Note the priorities: care for the land, care for the poor and their animals, and finally yourselves and your family.

The same priorities are emphasised in the gospel, where Jesus condemns ruthless greed and the neglect of others. The Greek word used, pleonexia, often translated “covetousness”, means wanting more and more. Add to that a feeling of entitlement and we have a good understanding of the thinking that has us where we are today.

In his book Living Faithfully, Bishop John Pritchard writes: “In the film Titanic, the chief engineer comes to see the captain at a very smart table and tells him the ship has hit an iceberg, the damage isn’t repairable and they will sink in a fairly short time. The idea is so far-fetched that people at the table simply laugh and carry on as if nothing has happened. Is that too dramatic a way of representing our current attitude to what’s happening to our planet because of climate change and environmental damage? Many scientists and pundits are telling us there’s a fierce urgency about this issue. Young people seem to have got the message more than their elders – they see it as a new moral imperative. Unfortunately, it’s their elders who are in charge of the ship.”

The young deserve better, as this old saying attributed to Native Americans reminds us: We do not inherit the earth from our ancestors, we borrow it from our children.