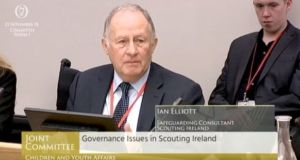 Ian Elliott, interim safeguarding manager with Scouting Ireland, wrote to the Minister earlier this week seeking withdrawal of a letter from Tusla criticising the youth organisation

Child protection standards in the organisation, which has 40,000 juvenile members, were sharply criticised by Tusla, the child and family agency, which said an assessment by its officials had found “live cases” where poor practice had “left children exposed to risk of harm”.

The criticism was part of a letter sent by Tusla on February 18th to Scouting Ireland chief executive Dr John Lawlor. The letter made a series of urgent recommendations over existing safeguarding failings at Scouting Ireland.

Mr Elliott last night confirmed to The Irish Times that he had contacted Ms Zappone seeking to have the Tusla letter “withdrawn”.

He told the Minister of Scouting Ireland’s “complete surprise” at the Tusla letter, and said the organisation was “very anxious to sit down and talk through the evidence on which it was based”.

A source close to Ms Zappone said she did not respond to Mr Elliott, as doing so would have inappropriately gone around Tusla, a statutory agency linked to her department.

Mr Elliott, who has worked with Scouting Ireland since mid-2017, said he was not aware of any current practices “to justify the levels of concern from Tusla”.

Scouting Ireland will meet Tusla officials in the coming days in an attempt to address concerns over its child protection standards.

The organisation was offered a meeting next Tuesday, but, “given the seriousness of matters”, is attempting to meet sooner, Scouting Ireland’s spokeswoman said.

In the February 18th letter, Tusla officials questioned the standard of supervision on overnight trips, due to incidents in recent years, where children had been subjected to sexual assaults by other juvenile members in camping tents.

Mr Elliott said the reality was providing constant supervision to children on camping trips would be an “impossible task” for any organisation.

However, Pat Rabbitte, the newly appointed chair of Tusla, defended its handling of the matter and the concerns raised by its officials.

“I have satisfied myself that the agency has acted professionally,” he said.

“Where we have access but don’t fully comply with the law, there are vulnerabilities for children,” he told RTÉ’s Six One News.

1 Brightest comet of the century visible in Irish skies for the next week
2 Reopening of pubs that do not serve food may be delayed beyond July 20th
3 Johnny Depp: Ex-wife or friend defecated in bed in ‘fitting end’ to marriage, court hears
4 Delicious details of Mary Trump’s book open up world of president’s family
5 Trump postpones election rally as Covid-19 cases surge
Real news has value SUBSCRIBE