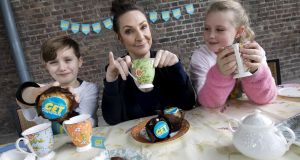 Pauline McLynn lends her support to the Great Get Together fund-raising initiative for Focus Ireland. Photograph: Chris Bellew/Fennell Photography

The Government must lay out a clear timescale on when and how it will deliver housing in response to the ongoing homelessness crisis, actor Pauline McLynn has said.

Speaking at the launch of Focus Ireland’s Great Get Together event, which takes place on the May bank holiday weekend, McLynn expressed concern at the impact of homelessness on the nearly 4,000 children currently living in emergency accommodation.

“Your formative years are when you’re a child. How is this going to impact on future generations? It just doesn’t bear thinking about. Yes, the Government is talking the talk but there is no limit on how long people can be left homeless.

“They don’t seem to have any timescale put together in their heads. They say the houses are being rolled out – where are they?”

Nearly 10,000 people are currently homeless, including 3,624 children from 1,614 families, according to figures from the Department of the Environment. Focus Ireland is urging people across Ireland to get involved with the Great Get Together weekend by holding small events such as yoga sessions, book clubs, coffee mornings, sponsored walks, movie nights and barbecues, to raise money for people without a home.

Focus Ireland has warned that even a short period of time in homelessness can have a very damaging impact on a child. It called on the Government in February to move away from the short-term solution of providing more emergency accommodation in favour of delivering on its promises of social housing.

Chief executive Pat Dennigan said the number of homeless people is continuing to rise week on week. “We really need to have much more housing provided for people who are homeless but also for the general population. That takes time but it really needs to be prioritised more than it is. This is an issue across the country. It’s an issue for our economy, too, because the increase in supply of housing will attract even more economic development,” he said.

“This is about prevention. It’s about stopping people falling into that trap and causing the damage to the kids into the future.”

Following the success of last year’s inaugural Great Get Together weekend, Focus Ireland has decided to hold the event again to raise money, which Mr Dennigan says goes directly into helping the charity provide permanent homes for families who are homeless. “Focus Ireland manages to help at least one family a day to secure a home. However, at least three more families still become homeless that same day so the crisis deepens.

“It would be great if when families and people come together in their homes, workplaces or local clubs this May bank holiday we could give a thought to the 10,000 people who are homeless and many more at risk.”

Those interested in holding an event can register at focusireland.ie