Thinking Anew – Let’s make it our business to respect others 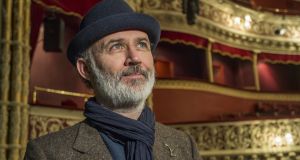 Tommy Tiernan: his revealing interviews show the power of really listening to the other person. If we are open-minded and honest, important truths are revealed to us. Photograph: Brenda Fitzsimons

I still have childhood memories of teachers telling us about lepers and how they were ostracised by their communities. The expression leper colony rings in my ears. In tomorrow’s Gospel St Mark tells the reader how Jesus stretched out his hand, touched the leper and cured him. In the first reading from the Book of Leviticus we are told that a leper is unclean and must “live apart”. And then in the second reading – from his first letter to the Corinthians – St Paul tells us: “Never to do anything offensive to anyone – to Jews or Greeks or to the Church of God; just as I try to be helpful to anyone at all times . . .” (1 Corinthians 10: 32 - 33)

There is such a wealth of wisdom in those readings. The reading from Leviticus sounds harsh but it is dealing with regulations dealing with legal purity. And like all writing, it has to be taken in the context of the time in which it was written. Both New Testament readings concentrate on healing, using words and actions to reveal the way in which we should deal with each other. They are about showing genuine respect to our fellow citizens.

Imagine how our world, our society, our lives would be transformed if we all made it our business to respect the other person. If we are open-minded and honest, truths are revealed to us.

Take last Saturday’s Tommy Tiernan show on RTÉ. There were three guests – an actor, a retired judge and a former international rugby player. Yes, I have seen Stephen Rea on screen, I’ve seen Brian O’Driscoll play rugby and I recall once before seeing retired judge Gillian Hussey being interviewed on television. I found myself listening to every word the three guests said. Three very different people speaking openly and honestly about their very different jobs and lives, yet they all had the same thing to say. I sat up in my chair when actor Stephen Rea spoke about his late wife Dolours Price, who was a prominent IRA member and suffered from alcoholism, and he then went on to talk about his relationship with his two sons. Stephen spoke with great warmth about Samuel Beckett. Rugby star Brian O’Driscoll told Tommy how he was affected by the suicide of a friend. He also told a lovely story about organising a “sleep-over” with his two girls in their car one night and how he waited in the car until after 10pm and they were fast asleep before carrying them back up to their beds.

Gillian Hussey recalled how she had helped a young woman, who appeared before her in court, to change her ways and leave the world of crime behind her. The young woman got her act together and blossomed. The woman later invited the judge to all the big moments in her life.

When Hussey, Rea and O’Driscoll were asked to name the most significant moments in their own lives, they all cited reaching out to another person and being able to help. And that could be in their professional work or in their personal lives. Of course they spoke about job satisfaction and how privileged they were to have jobs that they cherished and liked. But it was clear to see that the real highlights were those moments when they were doing something for other people, giving a helping hand to the other person.

And isn’t that exactly what healing and curing is all about. It’s being present, offering the helping hand, saying the wise and uplifting word to the other person. It’s about being kind.

I was captivated watching that show last Saturday evening. There was little or nothing said about God or religion. But all three people were beacons of great inspiration for me. Without any fuss or any illusions of any sort of pomp or grandeur they were speaking and doing exactly what St Paul is advising us to do in his letter to the Corinthians, and they were also mirroring the kind, healing act of Jesus to the leper, who asked to be cured.

The fear of Covid makes it easier for us to understand the plight of the leper. Living through these, the strangest of times, has made us extra aware of the importance of reaching out to the other person, offering a helping hand, which might even be a friendly smile.