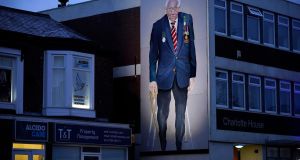 ‘Old age hath yet his honour and his toil; Death closes all: but something ere the end, some work of noble note, may yet be done . . .” These lines from Tennyson’s Ulysses came to life in the person of the 99-year-old the world came to know as Captain Tom, who walked a hundred lengths of his garden with the aim of raising £1,000 for health charities to mark his 100th birthday. He did that and more; the final amount raised was over £32 million. His country was rightly proud of him but he was an inspiration to people all over a world where there is so much to dislike and disappoint: he showed us humanity at its best. His motivation was simple: gratitude and respect for those who serve in the health service: “They’re all so brave. Because every morning or every night they’re putting themselves into harm’s way, and I think you’ve got to give them full marks for that effort.”

One of his many achievements was to top the UK music charts with the song “You’ll Never Walk Alone” which he performed with the singer Michael Ball. This is a song of hope in hard times and promise for the future: “When you walk through a storm/ hold your head up high/ and don’t be afraid of the dark. At the end of the storm/ there’s a golden sky . . .”

Words are powerful and inspiring, but we all know that life can still be painful and at times deeply lonely. The readings for tomorrow, the first Sunday in Lent, are honest about that but they encourage us to entrust the future to God because he will never abandon us. The reading from Genesis 9 reminds us of Noah and his relationship with God after the disastrous flood. (The story of a flood is found in other records of the ancient Near East which suggests that a catastrophic flooding event was part of the inherited memory of ancient peoples.) The reading tells us that God has made a covenant with his creation that transcends time and space. It is a promise that includes everyone and everything: “you’ll never walk alone” whatever the circumstances.

Water features in the gospel reading but in a more positive way as Jesus is baptised in the river Jordan by John the Baptist, clearly a solemn and significant event. Unfortunately, for some people today baptism has become an empty ritual, an aid to enrolment in a particular school.

In his book Being Christian, Archbishop Rowan Williams writes: “To be baptised is to recover the humanity that God first intended. What did God intend? He intended that human beings should grow into such love for him and such confidence in him that they could rightly be called God’s sons and daughters. Human beings have let go of that identity, abandoned it, forgotten it, or corrupted it. And when Jesus arrives on the scene, he restores humanity to where it should be . . . Jesus has to come down fully to our level to where things are shapeless and meaningless, in a state of vulnerability and unprotectedness, if real humanity is to come to birth. This suggests that the new humanity that is created around Jesus is not a humanity that is always going to be successful and in control of things, but humanity that can reach out its hand from the depths of chaos to be touched by the hand of God.”

There is a marked difference between living as a human being and being human. The good captain demonstrated that by his concern for and appreciation of healthcare workers and in doing so inspired others like five-year-old English boy Tony Hudgell, a double amputee from infancy who had no interest in learning to walk until he saw the amazing centenarian on TV doing his daily walk. He was hooked and although he had to learn how to walk on prosthetic legs, he committed to walk 10km to raise funds for the Evelina London Children’s Hospital where he had been treated. He raised more than £1 million.*