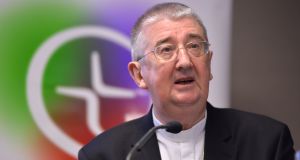 Catholic Archbishop of Dublin Diarmuid Martin: All faiths had “to avoid any form of fundamentalism”. Photograph: The Irish TImes

A study of religion which is limited to history and sociology may be blinkered in its understanding of faith, Catholic Archbishop of Dublin Diarmuid Martin has said.

There was also “ no evidence that a totally ‘religiously neutral secularist society’ is the best space in which to foster dialogue between religions”, he said.

He was delivering a lecture honouring the first Chancellor of the National University of Ireland Archbishop of Dublin William Walsh (1841-1921).

He said “one does not have to be a believer to engage in interreligious dialogue or in reflection on religion as a social phenomenon”. In apparent reference to plans for classes on religion and ethics in primary schools, he continued: “But a study of religion which is entirely limited to the history and the sociology of religion may well be blinkered in its ability to understand the nature of faith and its relevance in the personal life of individuals and it relevance to public life.”

There was “no evidence that a totally ‘religiously neutral secularist society’ is the best space in which to foster dialogue between religions”.

There were “forms of secular society worldwide in which hostility to religious values forces some religious groups into a dangerously narrow perception of their culture, into religious fundamentalism, and thus sharpen religious differences and misunderstanding of a pluralist society.The desire of a secularist society to reduce religion to the private sphere may make it hard for some to embrace fully the strong religious commitment of others.”

Inter-religious dialogue required “the commitment of persons who are strongly rooted in their own faith, and not just by persons who have confused religious commitment or by people who are not religious at all. What is important, however, is that we all address the situation with a sense of mutual knowledge and respect.”

All faiths had “to avoid any form of fundamentalism, fundamentalism in their own faith, fundamentalism about the role of religion. Religions are obliged to respect the legitimate autonomy of the secular order and of reason. Imposing a specific political programme in the name of God is to make yourself into God.”