St Malachy’s seminary in Belfast is to close 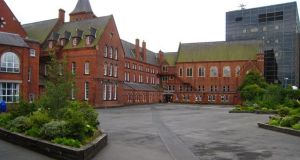 St Malachy’s seminary in Belfast is to close after 185 years.

St Malachy’s seminary in Belfast, which trained priests mainly for the Down and Connor diocese, is to close after 185 years.

From September next its three remaining seminarians will be relocated to other seminaries to continue their priestly formation. Currently located on the city’s Cliftonville Road, the premises is to be used for various diocesan purposes and services.

Founded in 1833, four years after Catholic Emancipation, St Malachy’s became the local seminary for the diocese of Down and Connor.

St Malachy’s also trained priests for other dioceses in the province of Ulster, including Raphoe, Derry, Clogher, Kilmore and Dromore, with up to 30 seminarians there at one time.

When Queen’s University Belfast (QUB) opened a Department of Scholastic Philosophy in 1909, seminarians from St Malachy’s began to study there for their degrees.

Announcing the decision, a statement from Down and Connor diocese said “the closure of the Department of Scholastic Philosophy at Queen’s University and, more recently, the progressive discontinuation of modules in scholastic philosophy on offer within QUB have placed a great strain on the required philosophical training of clerical students in Belfast as a prerequisite for theological studies”.

“Consequently, after a period of consultation and discernment, it has been decided that St Malachy’s seminary will cease forming students for the priesthood. From September 2018, all remaining seminarians will be relocated to other seminaries to continue their priestly formation.”

The closure of St Malachy’s means there are now just two seminaries left to train diocesan priests for Ireland: the national seminary at Maynooth, where there are currently 35 men in formation; and the Irish College in Rome where a further 13 are being prepared for priesthood.

All Hallows in Dublin, which trained priests for dioceses abroad, closed in 2015.