Cardinal Kevin Farrell: World Meeting of Families will be ‘the beginning of a new process’ in the Church 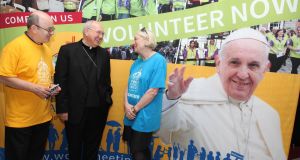 Cardinal Kevin Farrell at the Dublin Conference in preparation for the World Meeting of the Families 2016. Photograph: John Mc Elroy.

Old methods of evangelisation (preaching) in the Catholic Church have failed, as have old methods of marriage preparation, Cardinal Kevin Farrell told a conference in Dublin yesterday .

It was why he hoped the World Meeting of Families in Dublin next year “will be a great moment of revival for the Church across the world.”

From Drimnagh in Dublin, elevated to the College of Cardinals last November and prefect of the Vatican’s new Dicastery (Department) for Laity, Family and Life, Cardinal Farrell recalled how Ireland was renowned in the past for its missionaries.

“From here thousands of men and women left these shores over the years to evangelise the Americas, in Australia, Africa, Philippines, they brought the word of God,” he said. He was himself “known in Washington DC as priest number 39 ....I was the 39th Irish-born priest in the Archdiocese of Washington. Today unfortunately I’m number five.”

Everyone saw “the difficulties that face us but we’re not coming to Ireland to lament the situation,” he said, “we are here to light a candle once more.”

Pope Francis’s 2016 apostolic exhoration Amoris Laetitia (the Joy of Love) was “the beginning of a new process” in dealing with the reality of marriage, with the emphasis on preparation for married life rather than being “fixated on its challenges,” he said.

The document would be central to the five-day meeting in Dublin next year, and was the “basis of everything we do in the future on married life,”he said. The three-day international conference on the family in Dublin’s Helix Theatre is part of the ongoing preparation for the World Meeting of Families 2018. The attendance includes representatives from 50 countries.

Cardinal Farrell is the most senior Irishman serving at the Vatican. Born in September 1947, he was ordained in 1978. In the early 1980s he became a priest of the Archdiocese of Washington and in 1986 succeeded Fr (now Cardinal) Seán O’Malley as director of the archdiocese’s Spanish Catholic Centre.

In August last year he was appointed as Prefect of Vatican’s newly-created Vatican Dicastery for the Laity, Family and Life. He was created Cardinal by Pope Francis last November. His brother Bishop Brian Farrell is secretary to the Vatican’s Council for Promoting Christian Unity.