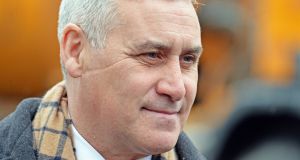 Tusla chief executive Fred McBride said a programme is needed to help children, particularly in their early years, to gain positive attachments to parents or care givers. “Without that positive attachment we are certainly storing up problems in the future.” Photograph: Eric Luke

Ireland needs an early years’ strategy based on more than just childcare, the head of Tusla, the Child and Family Agency, has said.

Speaking at a parenting conference organised by Tusla in Dublin on Thursday, chief executive of the organisation, Fred McBride, said a programme is needed based on how to help children, particularly in their early years, to gain positive attachments to parents or care givers.

He said the first three years of a child’s life is the window for developing that attachment.

“That is the period in which their brains grow quicker than at any other stage in their life and there is physiological research to absolutely prove that things like eye to eye contact, skin to skin contact, hugs, and cuddles help children’s brains grow,” he said.

“Without that positive attachment we are certainly storing up problems in the future.”

Children who do not make attachments display lots of anti-social, aggressive behaviour, failure to get along with peers and difficulty at school, Mr McBride said.

“So the importance of early years in terms of prevention is absolutely fundamental,” he said.

Ireland could learn from other jurisdictions that have developed measures about how parents attach with their children, particularly in the immediate days and weeks after birth, Mr McBride said.

“The solutions usually lie within families and our role should be to help families to arrive at their own solutions.”

The conference, in Dublin Castle, was launched by Minister for Children Katherine Zappone and was attended by more than 300 delegates, including professionals working in the field and parents.

Also speaking at the day-long event, Dr John Sharry, chief executive of charity Parents Plus, spoke on empowering parents to develop their strengths. He said one of the problems with professional services was they often did not engage with their public.

He asked how many people know what Tusla does or how to get access to it. “The big fear of professionals is that they’ll be overwhelmed, they’ll get too many in the door … I think what a fantastic opportunity to get so many people seeking your service,” he said.

“I would encourage services to really get out there and have contact with a wider number of families don’t fear over involvement.”