A life of stress, depression and mental torture for asylum seekers

Direct provision case studies: ‘We would do any kind of work to put food on the table’ 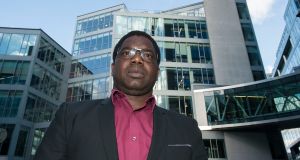 Thandi Sibiya was a banker in her native South Africa but the mother-of-two has effectively been housebound over the last six years due to the asylum process.

The 42-year-old sought asylum in Ireland in 2011, but the immediate relief of finding a safe country in which to live has gradually given way to frustration at the constraints of the direct provision system, particularly in the area of work.

For legal reasons, she was advised not to say why she left South Africa.

Forced to raise a family in Ireland on a €19.10 weekly payment, Sibiya says she lives below the poverty line and “hasn’t been allowed to cross it”.

“Raising two teenagers on that money in a so-called first-world country, you can only imagine as a mother what that does to you – the stress, the depression that you go through. You can’t buy anything for your kids.

“Even just getting on the bus going to the hospital: I have to go to management, they write a sick note for me that I have to give to the bus driver, you know how humiliating and depressing that is?”

Sibiya says she does not relish asking for handouts but is left with little alternative given the ban on finding work.

She lives alongside skilled professionals, including nurses and teachers who qualified in their own countries.

Sibiya says people in her situation would do any kind of work to put food on the table as well as to lessen the oppressive boredom which contributes to a “depressing and demeaning” existence.

Lassane Ouedraogo (47) found himself in a similar position when he arrived here in 2007 after fleeing political persecution in Burkina Faso, where he had been a leading public official.

He was not allowed to work for a single day of his six years staying in direct provision centres, and says he would have risked death in his home country had he known the “torture” he would be subjected to in Ireland.

“I had a lot of tasks in my life and then I ended up being forced to sleep for 24 hours, only wake up to eat and sleep. That was my life for six years.

“If I had a chance to be told what I was meant to go to in Ireland I think I would have even faced death [rather] than what I had to go through because sometimes the physical torture is better than the mental torture.”

Ouedraogo has since attained refugee status and now works as an administrative official for a third level institution, having recently finished a degree course in international relations.