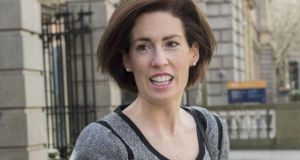 Hildegarde Naughton will be one of four Fine Gael TDs on the Oireachtas abortion committee. Photograph: Brenda Fitzsimons/The Irish Times

Fine Gael and Fianna Fáil combined will continue to command a majority on the Joint Committee on the Eighth Amendment of the Constitution, which will consider the recommendations of the Citizens’ Assembly.

A Dáil vote to set up the committee is expected to take place next week. There will also be a vote to prevent members rotating positions on the committee.

The original plan was to have 16 TDs and four Senators on the committee. The Seanad had pushed for seven representatives, but has accepted six.

A Sinn Féin Senator, whose name has yet to be confirmed, is expected to take a position. The matter was discussed discussed by the Dáil business committee on Thursday.

Fine Gael now has two Senators, Catherine Noone and Jerry Buttimer, and four TDs. Kate O’Connell and Bernard Durkan had already confirmed they would take part.

Labour will have just one slot on the committee. TD Jan O’Sullivan has already declared her intention to take the position, but Senator Ivana Bacik is also interested.

Fianna Fáil has confirmed its four TDs: Lisa Chambers, Billy Kelleher, Anne Rabbitte and James Brown. They will be joined by Senator Ned O’Sullivan. Two Sinn Féin TDs will serve on the committee. They are Jonathan O’Brien and Louise O’Reilly.

For Solidarity/People Before Profit, TDs Ruth Coppinger and Bríd Smith hoped to rotate a position, but the Dáil business committee has declined to support such an arrangement. The Social Democrats, the Green Party and Workers and Unemployed Action Group TD Séamus Healy had asked for a similar situation, but are expected to be represented by Catherine Murphy.

Three Senators on the Civil Engagement Group, an alliance of Independent representatives involving Mary-Alice Higgins, Lynn Ruane and Colette Kelleher, had also asked to rotate their seat, but Ms Kelleher’s was the name submitted to the Clerk of the Seanad. Also due to take places on the committee are Independent Senator Rónán Mullen, Independents4Change TD Clare Daly and Independent deputy Mattie McGrath.

1 Co Donegal hotel offers €2 rooms to locals to circumvent Covid-19 outdoor dining rules
2 Traffic chaos as ‘singing and dancing’ woman stops car in middle of motorway
3 More than 100 people gather in Co Donegal for anti-Covid-19 restrictions rally
4 Man with electric scooter who died in Meath was due to get married in the coming weeks
5 Coronavirus: Five deaths and 248 more cases reported
Real news has value SUBSCRIBE