‘Religion is in a mess. We really don’t have a credible message ’

The churches are ‘hugely out of touch’ with ordinary people, says Gordon Linney, clergyman and author of ‘Thinking Anew: Faith in a World of Change and Doubt’ 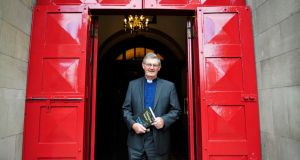 The Ven Gordon Linney is a compassionate man of clearly thought out Christian conviction who is never afraid of entering the fray in defence of that compassion. He is also an excellent and forthright communicator.

Ordained in 1969, he became curate at Portstewart, Co Derry, followed by three years as minor canon of Down Cathedral.

In 1975 he became vicar of the St Patrick’s Cathedral group of parishes in Dublin, then rector of Glenageary parish, in south Co Dublin, in 1980. In 1988 he was appointed Archdeacon of Dublin.

He served as honorary secretary to the Church of Ireland general synod and took part in the 1983-4 New Ireland Forum. He was also a member of a government review body on primary education, and served on the board of the Adelaide & Meath Hospital, in Tallaght, for many years.

He married Helen Henry in 1965, and they had three children: Susan, Heather and David. Helen died last May, after many years of illness, which partly led to the archdeacon’s decision to retire in 2004. Since then he has been writing a “Thinking Anew” column for The Irish Times on Saturdays. A collection of those columns was published by the Columba Press this week.

The book, Thinking Anew: Faith in a World of Change and Doubt, was launched on Thursday in Glenageary by the Catholic Archbishop of Dublin, Diarmuid Martin, itself a public acknowledgment of Archdeacon Linney’s contribution to vastly improved relations between the churches in Dublin.

That may be so, but he wonders about the overall health of Christianity in Ireland today.

Christianity “probably has never been in as bad a state as it is. From the sidelines of retirement I’ve been able to reflect on it, and it just seems to me there’s been a huge disconnect between where the churches are and what they see as priorities and where ordinary people are in their lives. That’s at all levels, right through, down to parish level.

“There is less contact between clergy and people in their homes, parish visiting, that sort of thing. When I was a young clergyman you’d be out among people and you’d be able to talk to wives and children. Where’s the contact between the clergy and young people today? Virtually gone . . . right through the whole structure at a leadership level, and this worries me more than anything else.”

He believes “there’s an industry called religion, and people who get into senior positions are obsessed with it. It usually takes the form of being interested in subtle theological points or interchurch relations, whatever they mean . . . because I think they’re increasingly meaningless . . . liturgies, all this sort of shopfront stuff of religion. I think they’re hugely out of touch.”

There’s a reaction to this within the churches. “When I was growing up in the Church of Ireland, for example, we always had our people out on the edge. They might lean towards Anglo Catholicism, or they would lean towards biblical evangelical, fundamentalist views on the other. But in the middle there was a great band of people, and that balanced the ship.” This is no longer the case, he believes.

Reflecting on how the different extremes in churches today express their views so strongly, he recalls the observation of an English priest. “He thought the church of today was rather like a swimming pool and that all the noise was coming from the shallow end.” It was “a good description of the way things are in the Church of Ireland”.

What has happened is that “the middle is being pulled apart in both directions, and it worries me most of all, because it would take me on to the other dimension – why religion is in a mess, that we really don’t have a credible message to bring to the world. We just don’t have it.”

The “rather negative attacks on secularism, which are ill thought out, are just hostile, may have to do with the failings of the church in the past. But it’s worse than that. Take science, for instance. [There’s a] simplistic view that science and religion don’t get on. Manifestly untrue.

“A lot of serious-thinking people who are scientists are religious, and vice versa, because they are aware of a spiritual dimension to life beyond the merely scientific.”

The churches “aren’t engaging with those subjects, and the man or woman in the street reads headlines like ‘Scientists prove that God doesn’t exist’, or something of this kind, and they’re left floundering. There’s no attempt to reinterpret. I’m not talking about reinventing, to reinterpret what we mean by God in the context of a scientific/technological age that connects with ordinary people on the bus and on the street. That’s what’s seriously lacking.”

It is not peculiar to one church. “If I look back into the 20th century, where Christianity was lived it had a huge [impact]. It still has a huge impact.” All “these little people back in their little institutional churches are exposed by this”.

In South America there was “Archbishop Romero, the Catholic bishop who courageously, if somewhat belatedly, turned to defend his priests. Look how long it took for him to be recognised by his own church. They resented this martyr. Why? Because he didn’t fit into the thinking of certain people in the Curia.”

In Asia “you find Mother Teresa, Roman Catholic, picking up the dying and abandoned on the street side. You go to the United States and you find a Baptist, Martin Luther King, leading his people to freedom in a peaceful way. All of these people tracing their mandated authority to the gospel of Jesus Christ. That’s where the credibility of the church is manifestly seen.”

And “even on our own island the wonderful Gordon Wilson, whose life was destroyed by the evil of the IRA, yet in that moment forgave them. A Christian to the bone. These are the people who have demonstrated that in all our Christian traditions, that Christianity lived, works. When it’s lived people admire it and give it credit.”