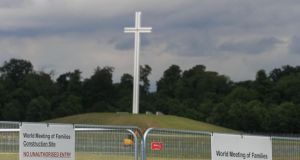 Preparations under way at the papal cross in the Phoenix Park, Dublin, for the visit of Pope Francis as part of the World Meeting of Families. Photograph: Gareth Chaney/Collins

Unlike Pope John Paul II in 1979 who, with his training as an actor, took to the Irish stage with alacrity, Pope Francis will be chewing on his lip as he’s ushered around the country, the subject of a photo shoot here, a meeting with a politician there or a millionaire donor somewhere else. But beamingly happy when he’s greeting the people.

Francis’s real interest is in his belief that systemic reform is needed in the Catholic Church, nothing less than what he called “a change of era” whereby a radical and fundamental adjustment needs to take place to facilitate a more adult, participatory institutional model of church, with a focus on service – “the smell of sheep”, as he famously described it. Jesuit theologian Gerry O’Hanlon calls it a “quiet Velvet Revolution”.

For Francis the highlight of his visit won’t be Croke Park or the Phoenix Park or Knock but the Capuchin Day Centre in Dublin city where he will see his model of church come alive before his eyes. A clear focus on Jesus’s mind rather than on Rome’s bidding.

The rest he will endure with stoical resolution, possibly asking himself over and over again what he needs to do to convince the church, particularly in Ireland, that the reforms of the Second Vatican Council are back on the agenda.

Because even though Francis’s presence will give a lift to Irish Catholics, and even though the Irish bishops may enjoy a fleeting respite from surfing the customary waves of criticism and apathy, the truth is that, unlike in the aftermath of the 1979 papal visit, there’s less room for imagining that a temporary high can substitute for the kind of painstaking reforms that are needed.

Irish Catholics want the open, adult, participatory church that Francis is proposing, a ‘synodal’ church that’s in tune with the world

Another difficult truth is that, even though on any assessment the Irish Catholic Church is in free fall, there’s as yet no sign of Francis’s revolution in Ireland, despite the fact that it’s becoming increasingly obvious that a seismic shifting of perspectives has taken place in recent years.

But there’s hope. For one thing, Francis and the people still in the pews in the Irish church are now thinking along the same lines.

This is clear from a survey carried out in 2012 by Amárach Research for the Association of Catholic Priests (ACP). It’s also clear from another survey this year in the west’s Killala diocese in preparation for a diocesan assembly which, through the votes of 300-plus representative delegates, passed a series of resolutions underlining the need for reform.

And the recent four regional meetings of the ACP confirm yet again that Irish Catholics have rejected the few insipid teaspoons of fake consultation ritually on offer in Irish dioceses to tick a box for sending to Rome.

Irish Catholics want the open, adult, participatory church that Francis is proposing, a ‘synodal’ church that’s in tune with the world and responsive to people’s needs where decisions are made by people, priests and bishop together, after debating and agreeing on what needs to be done.

They want movement on church teaching, structures, leadership, worship, gender, ministry and a range of issues now obvious to everyone apart from a clerical elite in deep denial who are either unwilling or unable to respond.

In short, Irish Catholics want a people’s church, and all the evidence is that,unless this begins to emerge in Ireland, the Catholic Church will rapidly disappear. The people know it; the vast majority of priests know it; even the dogs in the street must sense it; but our leaders are sitting on their hands.

Bishops, most of whom give no indication that they have any appetite or interest in Francis’s reforms, seem content to preside over a declining church that will see them out

Indeed, the very image of 30 or so elderly bishops meeting in Maynooth to make decisions for everyone else is now anathema not just to Irish Catholics but to Pope Francis.

One straw in the wind is that, between pope and people, there’s an emerging consensus that if the decline of the church is to be arrested, the momentum will have to come from the people. It’s the only plan B.

Priests are older, fewer, weary. Bishops, most of whom give no indication that they have any appetite or interest in Francis’s reforms, seem content to preside over a declining church that will see them out. Despite that, in a Francis-model church, the ability and commitment of Catholics are tangible assets.

The road map is clear. For bishops and priests, the question is: are we prepared to trust the people now that we know the people no longer trust us?

1 Warning of serious brain disorders in people with mild coronavirus symptoms
2 Mary Trump’s book: Eight of its most shocking claims about the US president
3 Airborne coronavirus: What you should do now to help yourself stay safe
4 Newton Emerson: North’s parties tired of second-guessing shadowy forces behind Sinn Féin
5 Storey funeral highlights fundamental problems with Sinn Féin
Real news has value SUBSCRIBE