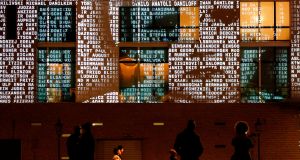 A light installation, #everynamecounts, at the French embassy in Berlin ahead of International Holocaust Remembrance Day on January 27th. Photograph: Odd Andersen/AFP via Getty Images

Taoiseach Micheál Martin has reaffirmed “unequivocally and publicly, Ireland’s absolute commitment to Holocaust remembrance and to fighting the ugly scourge of anti-Semitism and racism”.

Noting that last June the Government appointed an anti-racism committee with a mandate to develop a new national action plan, he said “this is a fight that will need to be sustained with energy and application into the future as new technologies and ever-evolving platforms provide new opportunities for old prejudice and hate”.

“Along with the other members of the International Holocaust Remembrance Alliance, Ireland last year adopted the 2020 ministerial declaration which affirmed the international community’s commitment to combating Holocaust distortion, anti-Semitism and other forms of discrimination,” the Taoiseach said. “Such measures are particularly important as anti-Semitism and racism once again begin to rise across Europe. ”

Dublin’s Lord Mayor, Hazel Chu, said people in the city “feel privileged to be among survivors of the Holocaust and descendants of survivors who have made Dublin and Ireland their home”.

Israel’s ambassador to Ireland, Ophir Kariv, said that “as anti-Semitism raises its ugly head in Europe and other places, sometimes taking new modern forms, it must be fought decisively.”

He recalled how the modern state of Israel was established in 1948, three years after the Nazis were defeated.

“Many survivors of the Holocaust came to the newly independent state to live their lives. They rekindled their spark of life working to build a modern, dynamic and democratic state of Israel. Unfortunately, however, racism and xenophobia are still haunting humanity,” he said.

Leonard Abrahamson, president of the Jewish Representative Council of Ireland, recalled the “intent of the Nazis and their collaborators to murder every Jew in every country of Europe stretching as far north as Norway, as far south as Rhodes, as far east as Russia, and as far west as Ireland. They also included those Jews living in the countries of north Africa.

“The Nazis also murdered millions of other victims but, as Elie Wiesel reminds us, ‘It is true that not all victims were Jews, but all Jews were victims.’”