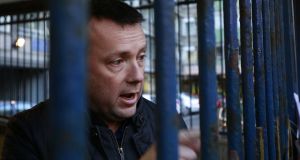 Brendan Ogle, co-founder of Home Sweet Home, at Apollo House: “Government policy on housing is a joke. But the people are going to change it. It’s going to happen the way we beat water.” Photograph: Nick Bradshaw

The Home Sweet Home group will build a mass movement of citizens to change housing policy in the way the Right2Water campaign “beat” water charges, the group’s co-founder Brendan Ogle has said.

The movement will be “multi-stranded” – legal, political and campaigning – to challenge the “broken policies which favour banks, vulture funds and put property before the most basic needs of people”.

Mr Ogle, education officer with the Unite trade union, described the group’s 28-day occupation of Apollo House – a vacant Nama-managed office block in Dublin 2 – to accommodate homeless people as the “most stressful but most rewarding thing” he had done in more than two decades of activism.

The group left the building on January 12th in compliance with a High Court order. During their time there, almost 90 homeless people stayed and moved onto supported six-month accommodation.

Six homeless people are still being supported, staying in a house rented by the group until suitable accommodation is found.

“I am not egotistical enough to think that when there’s an attack on me or an attack on Unite it’s about me or Unite. It’s about powerful forces who see a potential threat to their hegemony. And you know what? They are right, because that is what this campaign is.”

Home Sweet Home “will be a permanent and very necessary intervention in the national debate about housing”.

“Housing policy has been broken since the 1960s and successive governments’ policies have made it worse. It is going to take something really transformative to turn that around. Government policy on housing, its reliance on the private sector, is a joke. But the people are going to change it, masses of them. It’s going to happen the way we beat water.”

The level of support shown to the group on social media, by volunteers, in donations – €170,000 was raised – and by the business community was “overwhelming and surprising”, he said.

“There’s far more hope than I thought there was for a movement of people that can transcend all that nasty divisive inequality, austerity. I think the people are waking up, day by day, campaign by campaign, person by person.”

“A new party is not fixing it. Fixing it is about communicating with the population about what is really affecting their lives and then using that mass mobilisation to direct change in politics, in all its complexity. That mass mobilisation is coming and I think the people who benefit from inequality know that.”

A legal case “is being built”, he says, to argue an “implied right to housing” in the Constitution “backed up by a weight of international law”.

Home Sweet Home will “go to the highest court in the land, and to Europe if necessary,” he says.

The group will publish its accounts, this week, showing how much was raised and how much was spent, and on what. It is neither taking further donations nor planning further occupations “currently”.

A conference, to plan further strategy for Home Sweet Home, will take place in the Mansion House on February 18th.