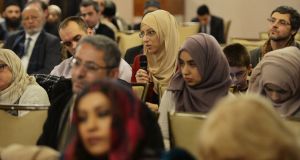 Fardus Sultan speaks at the Irish Muslim Board event at the Maldron Hotel in Tallaght. The focus was on achieving a more inclusive Ireland. Photograph: Alan Betson

The Government must introduce clear laws removing the ability of schools to discriminate on the basis of faith in order to create an inclusive Ireland that values the contribution of its Muslim residents, politicians have been told.

The policing and teaching professions must also change their entry requirements to ensure young Muslim men and women are able to join their ranks and better reflect a more diverse Republic, Dr James Carr from the University of Limerick said. The media was also lacking in Muslim faces and voices, he added.

Speaking at a meeting of political representatives with members of the Irish Muslim community, Dr Carr said Irish Muslims continued to face exclusion at educational and professional level.

He welcomed Minister for Education Richard Bruton’s call for a ban on religious schools using religion as a factor in admissions, but said the legislative proposals on the table “do not go far enough”.

“Muslim children cannot find themselves in a situation where their school friends go on without them in their school career, potentially severing friendships,” he said. “No child or teacher should be left without knowledge of how to seek support or challenge racism in the classroom.”

The Government must also protect the rights of young Muslim women who want to wear the hijab in school, he said.

He added that An Garda Síochána needed to end the ban on wearing a head cover which excludes Muslim women and Sikh men from joining the force.

Yasmin Selim, a 17-year-old Leaving Cert student from Dublin, said the Muslim community recognised that it had a duty to make Ireland a better place and was not seeking special privileges or treatment.

“Our contribution as a community is not confined to the health services, Muslims are running businesses and providing employment, lecturing in third-level colleges and contributing to Ireland’s research efforts,” she said. “They are also playing hurling and football, coding software and working in local communities.”

Ms Selim said there was a new generation of Muslims born and bred in Ireland “who are as Irish as they are Muslim. If someone says to them go home, well, they are already home.”

Minister of State for Justice David Stanton told the meeting, organised by the Irish Muslim Board, that the key message of a soon-to-be-published migrant integration strategy would be that “integration is a two-way process”.

“Successful integration is the responsibility of Irish society as a whole. I encourage political parties to engage with the new societies to get involved in the political process in Ireland. Not only do Irish people need to reach out, people who have come to Ireland need to actually get involved as well,” he said.

The 2011 census found there were 49,000 Muslims living in the State and the results of last year’s census are expected to show a large increase in the number. This would show that Islam is one of the fastest-growing religions in the State, said Mr Staunton.

Ruth Coppinger, Anti-Austerity Alliance TD, said Irish Muslims face exactly the same issues as the rest of the Irish population, most notably rising rents and the housing crisis. “The new communities are actually more reliant on the private rental sector and don’t have the same family structures in Ireland if they do become homeless through rent increases.”

She also warned of the growing rate of Islamaphobia in the Republic and joined Dr Carr in calling for anti-hate crime legislation.

1 Speed and distance of Covid-19 droplets tracked by Mater researchers
2 Prepare for six months of Covid-19 restraints, warn health officials
3 Covid-19: Seventy cases in Cork traced to local pubs and restaurants in recent weeks
4 No joy for consumer with a faulty Husqvana chainsaw
5 Almost a third of Garda firearm discharges found to be accidental
Real news has value SUBSCRIBE