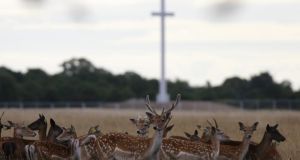 Papal Cross in Phoenix Park: people warned to be up to date with vaccinations to mitigate against danger of disease. Photograph: Nick Bradshaw

Members of the public planning to see Pope Francis at events in Dublin and Knock this month may be hoping for some spiritual healing.

But due to the many healthcare risks associated with “mass gatherings” worshippers run the risk of contracting infectious diseases, Irish public health experts have warned.

Dr Mary O’Riordan, specialist in public health medicine at the HPSC, said: “Given the nature of this historic papal visit, a large number of young children and elderly visitors are expected to attend the final Mass, including many international visitors.

“In the current context of the ongoing measles spread in Europe, it is highly advisable that all attendants, especially young children, ensure that they are up to date with their vaccinations.”

She was commenting after the HPSC issued an advisory bulletin proclaiming that preparations for the pope’s visit to Ireland need to be more than just “a wing and a prayer”.

However, outbreaks have occurred at Muslim, Christian and Hindu religious events, at sports events and at large-scale open air festivals in the past.

“When they occur, they most commonly involve vaccine-preventable diseases such as measles, influenza, mumps and hepatitis. Other reported outbreaks are mainly of gastrointestinal infections caused by a number of different pathogens.”

The papal visit is expected to attract 15,000 overseas visitors and the final Mass of the visit will draw together a crowd of about 500,000 people.

In July, two cases of measles were identified by the HSE in an adult and child in Dublin who had recently been in mainland Europe. Since January 2018 there have been over 40 cases of measles diagnosed in Ireland.