Opinion: New emphasis on importance of lay participation the key to revival 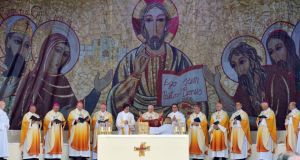 The International Eucharistic Congress in 2012 marked a turning point, when Irish Catholics saw that they were not isolated. Photograph: Alan Betson

Something is quietly changing in the Catholic Church in Ireland. It has had two horrible decades in which scandal seemed to follow scandal. The ordinary faithful were left reeling.

I will never forget one woman in her 80s saying to me after the Murphy report: “I have been a faithful Catholic all my life but this has nearly broken me.”

However, in the past 18 months I have been all around the country at different Catholic gatherings, everything from parish novenas to international events. A quiet momentum is building.

What has happened in the northern diocese of Down and Connor is a good example. Two to three years of “listening sessions” in parishes resulted in the emergence of a clear sense of priorities, summarised in a pastoral plan.

The priorities are: having an open and welcoming community, with active lay participation, where clergy and religious are supported and nourished in their roles, where faith and worship are central, and where the faith is passed on.

The launch of the plan in the Belfast Waterfront, which was co-ordinated by the appropriately named Living Church office, was attended by 1,600 people. It was great to see a strong presence of fellow Christians from other traditions, such as Bishop Alan Abernethy, Church of Ireland Bishop of Connor.

At the Waterfront the previous day there had also been a faith festival for about the same number of year-eight pupils (roughly equivalent to first year in the Republic).

Listening processes
Other dioceses completed their “listening processes” some years ago, and now are trying to “bed down” good practice. For example, the archdiocese of Tuam has a gathering for all its parish pastoral councils in Westport once a year, followed by an in-service for priests. Kildare and Leighlin ran its own diocesan eucharistic congress before the international event in the RDS in June 2012, generating such a buzz that they held another this year.

The diocese of Killaloe expected about 400 people for the launch of its pastoral plan in Ennis on September 14th, but more than 500 people turned up. Given it was the day of the under-21 All-Ireland hurling final, and that hurling might be considered Clare’s first religion, it was an extraordinary turnout.

There are other indicators of fresh life, such as an increased internet presence , including iCatholic, a portal aimed at becoming “the equivalent of the RTÉ player or BBC iPlayer for the Irish church”.

Then there are initiatives such as Catholic Comment, currently recruiting a second batch of speakers to appear in the media. There are many more ventures, too many to list. What is happening? Is it a “Francis bounce”? No. The pope might be better described as a bonus than as a bounce. This process was happening long before him.

Pope Benedict, with his declaration in 2009 that lay people share responsibility with the church for its future, gave an impetus to something already happening.

The International Eucharistic Congress also marked a turning point, because Catholics saw that they were not isolated oddities, and that the church was alive and well all around the world.

Eccentric hobby
And of course, having powerful voices in Irish culture making a concerted attempt to assign religious belief the status of a slightly eccentric hobby, with no right to participate in the public sphere, has been almost entirely counterproductive if the aim was to cow Catholics into silence.

Is everything in the garden rosy? Of course not. The age profile at these gatherings tends to be older, with a strong but small presence of much younger people. There is still a missing middle: the thirty- to fifty-somethings who are most alienated from the church.

There may also be a temptation to drift to the right, which must be resisted. The church’s social justice teaching is one of its strongest assets.

It is not a coincidence that one of Pope Francis’s first visits was to Lampedusa, the entry point, or tragically, the grave of many desperate African immigrants seeking new lives in Europe.

Due most of all to its own failures, the church has lost much of its credibility. It has also weakened a much-needed voice for the developing world and for immigrants, refugees, the unemployed and people with disabilities.

Recent reports in this newspaper have highlighted the dire conditions of asylum seekers in this country. Advocating for these people, and for all the poor in our society, is a vital church role.

But no church makes sense unless it also leads people to a transformative relationship with God. The whole country seems to have discovered the Buddhist practice of mindfulness. I am very fond of it myself. But before Buddhism hit Ireland, mindfulness was present in the Little Way of St Therese, and in Mother Teresa’s practice of doing small things with great love.

Rediscovering our Catholic spiritual heritage, along with encouraging a strong social conscience, can perhaps best demonstrate that the church is indeed a living church.

1 Civil War rape which led to pregnancy recalled in new TV documentary
2 Martin ‘seriously concerned’ at Covid complacency amid pressure over church events
3 The far right rises: Its growth as a political force in Ireland
4 The Sack of Balbriggan: The burning of a town that shocked the world 100 years ago
5 Golf group insist they adhered to public health guidelines during Tullamore trip
Real news has value SUBSCRIBE