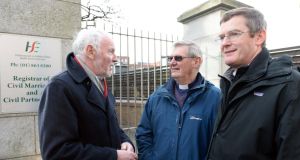 Brendan Butler, We Are Church Ireland, Archdeacon Gordon Linney, and Canon Mark Gardner, at the launch of Faith in Marriage Equality, outside the Civil Registry Office, in Dublin. Photograph: Eric Luke

The retired Church of Ireland Archdeacon of Dublin Gordon Linney has called for a yes vote in the marriage equality referendum.

“Personally, I think the claim of the churches to own marriage in any sense just doesn’t stand up because marriage was there long, long before there was ever a Christian church,” he said. It was “a civil matter”.

Archdeacon Linney was taking part in the launch of a group Faith in Marriage Equality, which is calling for a yes vote in the referendum. It includes Catholic groups We Are Church Ireland and Gay Catholic Voice Ireland, plus Church of Ireland group Changing Attitude Ireland.

Dr Richard O’Leary of the latter said members came “from a variety of faith backgrounds to support those loving, committed, same-sex couples who wish to enter civil marriage without distinction as to their gender”.

Brendan Butler, of We Are Church Ireland, said the Catholic Church’s opposition to marriage equality was the view of “the hierarchical church. We are representing a huge squad of ordinary Catholics. We have people in our group who are gay people as well as mothers and grandmothers of gay people. They are appalled at the attitude of the church”.