Ex-minister behind blasphemy reform will vote Yes in referendum 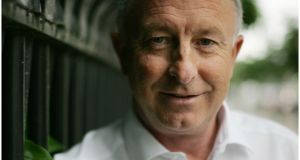 Former minister for justice Dermot Ahern: ‘Imagine the reaction if I proposed a referendum then.’ Photograph: Bryan O’Brien

One man who will be voting yes in Friday’s blasphemy referendum is former Fianna Fáil minister for justice Dermot Ahern. It was he who in 2009 introduced the current law on blasphemy, having no alternative. “It was designed to be impossible to prosecute,” he said on Thursday.

“It was either do that or hold a referendum. Imagine the reaction if I proposed a referendum then. There was no way I could recommend spending €2 million when people’s wages were being cut,” he said.

He became minister for justice and law reform in 2008 and inherited from his predecessor, the late Brian Lenihan, draft legislation intended to reform the 1961 Defamation Act dealing with libel and slander.

The media was demanding reform while politicians did not want defamation laws relaxed. On top of which he was advised that the Constitution required that there be a provision in such legislation to ban blasphemy.

The only alternative, said the attorney general, was a referendum deleting the constitutional requirement to have a law against blasphemy.

“I would have been laughed out of court for suggesting [to the government] such a proposal be put to the voters at a time when we were presiding over significant cuts to their wages and standard of living,” said Mr Ahern.

It would have led to more of “the government completely out of touch with reality on the ground” type of criticism, he said.

He and Mr Gallagher “spent many hours trying to fashion a proposal that, on the one hand, would fulfil our constitutional obligation, but, on the other, would cause least offence to the interested public”.

They raised the bar for prosecution so high that cases arising seemed impossible. They also banned prosecutions by private individuals and made the DPP sole prosecutor for blasphemy offences.

They also allowed a defence in such cases on grounds of “genuine literary, artistic, political, scientific or academic value”, without definition of such value.

What Mr Ahern had not expected was the onslaught of criticism he received on introducing the new legislation, “including from your newspaper”, he said. He was portrayed by some as a religious fanatic, even by some who knew he had no choice in the matter but to introduce legislation because of the constitutional requirement.

Even back then he had made it clear he would very much favour deleting the blasphemy provision from the Constitution if a referendum should take place. He will vote to do just that on Friday.