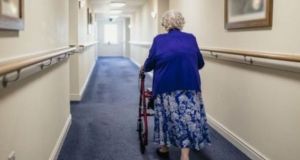 ‘In the long term, a reform of established models of care for older people in Ireland is required,’ Hiqa chief Phelim Quinn said. Photograph: iStock

An immediate review of the oversight of nursing homes and extra powers for the regulator are required as Covid-19 continues to impact on the sector, an Oireachtas committee has heard.

The Health Information and Quality Authority (Hiqa) said it needed extra powers to implement and police the recommendations of the Government’s expert group report on nursing homes, including an increase in on-site inspections and monitoring Covid-19 preparedness.

“In the long term, a reform of established models of care for older people in Ireland is required.”

Mr Quinn told the committee that nursing homes faced “substantial challenges” due to a variety of factors, including limited working knowledge of the extent of how the disease spread asymptomatically, constraints on testing, and the scarcity of PPE, as well as problems caused by the need to replace quarantine staff. He said infection prevention control procedures were “not commensurate with what would be required to effectively manage a pandemic”.

He also said “the fact that 80 per cent of nursing homes are privately managed with minimal formal referral pathways to the HSE” was a challenge.

A number of recommendations made by the Nursing Homes Expert Panel report, published in August, “require urgent implementation and/or planning for implementation to commence immediately,” he added.

Mr Quinn told Sinn Féin health spokesman David Cullinane that it had been “highlighting deficits” and telling the Department of Health about the need for more powers and regulatory reform for seven years.

“It’s a message we’ve consistently included within reports and submissions to the Department of Health since 2013,” he said. He cited the lack of adult safeguarding legislation, which would allow for dedicated investigations into abuse, including institutional abuse, as a particular issue.

Hiqa told Social Democrats co-leader Róisín Shortall that it had 22 staff dedicated to nursing home oversight, with 17 inspectors included in that number. An additional nine staff, including seven inspectors, have been sanctioned by the Government.

Ms Shortall raised the absence of statutory staffing levels in nursing homes, and asked if this had been raised with the Minister for Health by Hiqa.

Mary Dunnion, chief inspector of social services, said the issue had been raised in submissions to the department, adding that “the totality of regulations about care and welfare need to be reviewed as a matter of priority”.

Fine Gael TD Fergus O’Dowd strongly criticised Hiqa’s response to families of the 23 people who died in Dealgan House nursing home in Dundalk, Co Louth, which is in his constituency. He said the families had struggled to obtain information about the impact of the pandemic under Freedom of Information laws, he said.

Dismissing the Hiqa opening statement as “self-serving”, he said: “They’re getting no help from Hiqa . . . who are facing their correspondence with redacted FOIs and lack of information.” This was “deeply hurting” the families, he added.

He also criticised the lag between March 13th, when Hiqa ceased inspections of nursing homes in line with public health advice, and when it provided recommendations on how to manage the disease in the facilities, which Hiqa said was in the first two weeks in April.

“I would consider that to be very, very late indeed and it’s during that period of time people were dying in nursing homes up and down the country.”

Recent inspections have included listening to views of people living in nursing homes, who Mr Quinn said had expressed “a range of emotions” on Covid.

“Some feared contracting the virus and worried about their families and friends, while others felt a deep sense of isolation and loneliness as a result of the visiting restrictions,” he said.

All residents said they were “deeply grateful” to staff who had provided care in “extremely challenging circumstances”, Mr Quinn noted.