Calls for immediate reintroduction of Covid-19 testing at meat plants 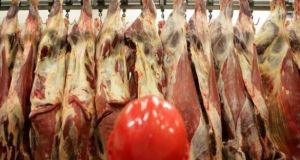 There have been 1,500 cases and 31 clusters within meat plants to date with four clusters currently active, unions say.

A trade union representing over 6,000 workers employed in the meat processing industry has called for the immediate recommencement of Covid-19 testing for workers amid fears of growing numbers contracting the disease.

Meat processing plants have been among the most vulnerable settings in terms of the spread of the coronavirus in the State.

SIPTU Divisional Organiser Greg Ennis said the union was “extremely concerned”serial testing in meat plants had been halted by the HSE, with all testing withdrawn from meat processing plants since Tuesday without any advance notice.

“There have been 1,500 cases and 31 clusters within meat plants to date with four clusters currently active. Outbreaks of Covid-19 are also linked to overcrowding and hot-bedding in houses located close to several meat plants,” Mr Ennis said.

“Failure to reconvene weekly testing of meat plant workers could well result in another surge of cases across the industry and in their wider community. It is well established that the meat industry generates the perfect vectors for transmission of the virus.”

Mr Ennis said that the testing and tracing system for people with Covid-19 is patently inadequate and has never achieved the 15,000 tests per day as promised on March 19th by the then minister for health Simon Harris.

“Six months later, we are still awaiting an efficient testing system with the winter flu season approaching. Our members are justifiably fearful for their health, their families and their livelihoods in the essential meat and wider food production sector.”

The HSE has confirmed that Covid-19 testing of staff at meat and food processing facilities is “being rescheduled into next week” as a precautionary measure to allow it focus its resources on the growing demand for testing among people for coronavirus symptoms in the community at large.

“Testing demand nearly trebled on Monday with a requirement for over 13,000 community tests and over 3,000 hospital tests,” said the HSE in a statement.

“We are liaising directly with the facilities scheduled for testing and will be re-scheduling planned testing next week. It is important to remember that where an outbreak occurs in a plant then normal mass testing will still occur in meat plants.

“Public Health will be in touch locally in those situations. In the meantime, if a staff member develops symptoms of coronavirus, we would ask them to self-isolate and phone a GP to be referred for a free coronavirus test.”

According to the HSE, serial testing of staff in meat plants, which commenced on August 21st, has yielded some 40 positive cases so far and a positivity rate of 0.28 per cent - which has been described as “very low” by the industry’s representative body, Meat Industry Ireland.

Meat Industry Ireland’s Cormac Healy said that results to-date from Covid-19 serial testing being carried out across all primary and secondary meat processing facilities in the country have been very encouraging and show an extremely low incidence of positive cases.

“This demonstrates that the comprehensive protocols and mitigation measures in place in processing facilities across the country are working,” he said.

“We understand that a decision by the HSE to pause the screening programme has been taken in order to release capacity for increased demand for symptomatic community testing,” said Mr Healy, adding that no industrial work setting has had such a comprehensive testing programme in place.

“Clearly, the low level of detection of positives in the screening at meat plants facilitates this change in HSE priorities. We will continue to be guided by the public health authorities as regards the appropriate testing approach and stand ready to facilitate further testing at any time.”

On Wednesday night it emerged the HSE had suspended testing for Covid-19 at food and meat processing plants due to capacity issues and increased demand for testing.

The increased surveillance of meat plants was announced last month in response to a surge in Covid-19 infections at four meat factories that contributed to the lockdowns of Kildare, Laois and Offaly.

In a statement to Sinn Féin, HSE director of public health mid-west Dr Mai Mannix said a decision had been taken nationally to “postpone” testing for the virus at food processing plants.

This was “because of the increased capacity needed at the moment to deal with people with symptoms”.

“The decision to recommence Covid testing at food processing plants will also be taken at national level,” she said.