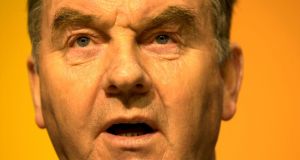 Former minister for education Michael Woods announced on October 3rd, 2000 that the government was setting up a redress scheme. Photograph: Frank Miller

The Oblates, and others of the 18 religious congregations concerned, may feel like King Canute on the shore fighting off a particularly filthy modern tide in contesting claims they should pay half the €1.5 billion redress costs paid by the State as a result of abuse in institutions run by them.

Who, post-publication of the Ryan report in 2009, with all its scabrous revelations about those abuses of children in such institutions, would not accept that the congregations should in conscience pay at least half those costs?

But it is to put the cart before the horse. It was the State which framed the redress scheme, not the congregations. And it did so in the teeth of anxious warnings by the congregations as to where the scheme’s loose structures would lead.

The congregations were proven correct.

Now, a seemingly profligate State demands the congregations pay half the costs it has incurred despite their insistent warnings. The congregations are correct. It is wrong, possibly even “immoral”.

On October 4th, 2000, the Conference of Religious of Ireland indicated the 18 relevant congregations’ willingness to be involved with a State compensation scheme for victims of abuse in residential institutions run by them.

It was in response to an announcement on October 3rd by then minister for education Michael Woods that the government was setting up such a scheme.

Talks began on November 10th, 2000, when it was agreed in principle the congregations would be part of such a scheme. Soon, however, it was clear they were troubled by what the State had in mind.

At a meeting on February 7th, 2001, they expressed concern at the level of contributions sought from them but in particular at “the process for validating claims of abuse which will require a low burden of proof”.

Seeing the direction in which the state was headed, the congregations sought an indemnity “against all further liability” as anything else “would leave them facing financial uncertainty for years to come”.

On April 30th, 2001, they told officials suggestions of a “50:50 ratio of contribution” from them was “far beyond what they envisaged happening”.

Rather, they felt their contribution should reflect “the fact that it was the State that had decided to proceed with this form of redress; that the State had decided to set the level of validation lower than that of the courts; [and] their own [congregations’] assessment of their own liability in a court situation”.

Negotiations became tense. On June 26th, 2001, the congregations made their “final offer” of IR£45 million – IR£20 million of which would be cash – payable over five years. They argued it exceeded “by a considerable margin what they reckon their exposure in litigation to be”.

They further claimed the scheme devised by Government would “in itself increase the number of claims, claims that they would otherwise never have had to meet”.

In a letter to Mr Woods on June 29th, 2001, then minister for finance Charlie McCreevy described the congregations’ offer as “quite disappointing” in the context “when contrasted with a possible cost to the State of the order of £200-£400 million” in redress payments.

Further correspondence between the congregations and government took place before an announcement on January 30th, 2002, that a deal was agreed. The congregations would contribute a €128 million (IR£100 million) to the redress scheme and would be indemnified by the State against further claims.

The deal was signed on June 5th, 2002. The Residential Institutions Redress Board was set up seven months later in December 2002.

Such were government estimates at the time that, according to a report by the comptroller and auditor general of October 2003: “By November 2001, the Department of Education and Science was estimating that the potential number of claimants was likely to exceed 3,000 and might rise to 4,000. By June 2002, [when the indemnity deal was signed] it was being estimated that the number of claimants could be 5,200 or more.”