Bishops discuss ‘journey’ to bring divorced back to faith

Synod adresses issue of the effects of broken marriages on children 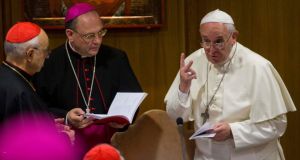 Pope Francis talks to prelates as he arrives for a morning session of a two-week synod on family issues, at the Vatican, yesterday. Photograph: AP Photo/Alessandra Tarantino

The world’s cities today are filled with the “widows and widowers of divorce”, with people “often walking in sadness, loneliness, and desperation”, the extraordinary synod of bishops was told in Rome yesterday.

In its outreach to such people, “the [Catholic] Church must always announce the indissolubility of marriage”, it was told, but the church “also lives in the world and what is required is a journey of penance and reconciliation to bring people back”.

Among the threats to marriage discussed by them were poverty, HIV/Aids, conflict, constant migration of peoples, uprooted and divided families in the Middle East, war, violence and all types of abuse,as well as images on social media, Fr Rosica said.

Bishops also spoke about the “penitential journey” that must be in place, noting its role in bringing people back to the faith, particularly the divorced and remarried, he said. Also discussed was the imposition of ideologies on third world countries involving NGOs and others, in the names of same sex and reproductive rights. One bishop told the synod that “our poverty does not mean we have no dignity.”

Among the experts attending the synod are Alice and Jeffrey Heinzen, who advise the US bishops on natural family planning. On the panel at yesterday’s media briefing, they were asked by The Irish Times, “with its rejection by Catholics worldwide, what’s to be done about Humanae Vitae?” A papal encyclical published in 1968 by Pope Paul VI, it bans the use of artificial means of contraception.

Ms Heinzen said that since 1968 such were the advances in natural planning research, “it is time for married couples to take a second look”.