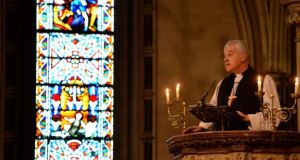 ‘The relationship of the Church of Ireland with the totality of Irish history and culture . . . can only become more complex as we approach the commemoration of 150 years of Disestablishment,” Archbishop of Dublin Michael Jackson has said. File photograph: Dara Mac Dónaill

Members of the Church of Ireland must address their identity as Irish Anglicans, Archbishop of Dublin Michael Jackson has said.

“The relationship of the Church of Ireland with the totality of Irish history and culture is complex and can only become more complex as we approach the commemoration of 150 years of Disestablishment,” he said.

In his presidential address to the Dublin and Glendalough diocesan synod in Greystones, Co Wicklow on Tuesday evening, he was referring to the removal of the Church of Ireland as the established state church of this island in 1869.

“While many still mourn the loss of establishment status, many argue that were it not for disestablishment coming historically when it did, the Anglican tradition in Ireland might have found it significantly more difficult to survive than it has done so,” he said.

“The conundrum raised by Victor Griffin, Dean of St Patrick’s of courageous and blessed memory, is something we in the Church of Ireland have never quite resolved and have rarely been able to address in an all-church way: the conundrum of being Anglican and Irish.”

It was “a religious and a psychological issue, not a political or territorial issue. I fear that this difficulty can only become more difficult in the days of Brexit,” he said.

“As we commemorate the Disestablishment of the Church of Ireland and as this commemoration falls at a time of political stalemate and atrophy in so many spheres, it is important that we address the issue of our identity as Irish Anglicans.

The period 2019-2021 “will give us the opportunity to work out, through the 150th Anniversary of Disestablishment, what it is to be disestablished today. It follows immediately on the Commemoration of the end of World War 1 in November 2018,” he said.

“We are in a position in every parish in the diocese to explore and to share this history and this future with our neighbours in an ecumenical, post-modern and increasingly post-Christian Dublin. There is an historical and a contemporary story to tell and we have our part to play and our contribution to make.”

More generally the Archbishop recalled how “during the year past, I was asked on a number of occasions what sort of a church the Church of Ireland is and instinctively I replied: a scriptural church”.

“Many may find fault with such a description, may even recoil from it - in the spirit of Oscar Wilde who when asked if he had any religious belief replied: ‘I don’t think I have any. I am an Irish Protestant’ - but I would stand by it and I would do so from an Anglican perspective,” he said.