Calls for resignation of Eddie Shaw, former spokesman for Cardinal Desmond Connell, as chairman of school board 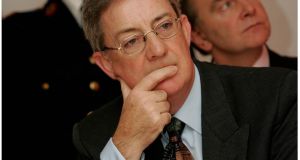 Eddie Shaw, photographed in 2004. At a stormy meeting last Thursday, Mr Shaw apologised to the school parents’ association at the Harold School in Glasthule for distributing leaflets to children promoting the Vigil for Life rally in Dublin on June 8th. Photograph: Alan Betson

There have been calls for the resignation of Eddie Shaw, a former spokesman for retired archbishop of Dublin Cardinal Desmond Connell, as chairman of a Catholic primary school board in south Co Dublin.

They follow Mr Shaw’s distribution of leaflets to children at the Harold School in Glasthule promoting the Vigil for Life rally in Dublin on June 8th.

Fine Gael TD Mary Mitchell O’Connor is a former principal of the school.

At a stormy meeting last Thursday, Mr Shaw, who succeeded Senator Rónán Mullen as Cardinal Connell’s spokesman in September 2002 and who is head of public relations at Carr Communications, apologised to the school parents’ association.

‘Intended for every bag’
Minutes of the meeting seen by The Irish Times state that “on Friday the 7th of June, a notice for a pro-life vigil was put in the bags of three classes. The leaflets were intended for every bag in the school but some teachers either chose not to put them in and others forgot.

“The leaflet highlighted a vigil taking place last weekend for the Pro-Life Campaign against the upcoming legislation on abortion. The parent body were outraged that the children were being used as vehicle to promote a controversial campaign,” it said.

Parents who spoke to The Irish Times were very angry at their children being used in this way. One parent of a five-year-old was asked by the child what an abortion was and felt deeply annoyed to have been put in that position.

‘Miss the point’
Parent Mark O’Driscoll said Mr Shaw told the meeting “he should have put the leaflets in an envelope, which is to miss the point entirely”. He felt Mr Shaw’s apology was “inadequate”.

Another parent who did not wish to be named described as “preposterous” Mr Shaw’s assertion at the meeting that his action wasn’t political, and said his explanation lacked “all plausibility”. Mr Shaw “should not be chairman of the board of management. He is not fit to hold that position,” the parent said.

Ms Moore was “not available”to comment to The Irish Times on the matter and Mr Shaw responded that the “issue is a matter for the school board”.