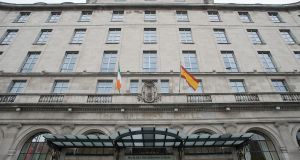 Fourteen homeless families who have been living in the Gresham Hotel in Dublin will be accommodated elsewhere after a change in policy on accepting emergency referrals, Dublin City Council has said.

Brendan Kenny, deputy chief executive of the local authority with responsibility for housing, said some of the 14 families would go to hubs while others were eligible for social housing.

The agreement between the hotel and the council was terminated as the hotel is set to undergo a refurbishment project from February, which will reduce the overall number of beds available.

One woman who has been living in the Gresham for the past 18 months with her eight-year-old son has said the council had not yet offered her alternative accommodation.

Sinead Hughes told RTÉ’s News at One that she was “self accommodating”. meaning she must phone around to find accommodation for herself, the cost of which is then covered by the local authority.

“I’ve been phoning around but nowhere is taking people,” she said.

Ms Hughes will have to leave the hotel on February 1st as the new owners of the Gresham have told the city council that it would not be renewing their contract to accept homeless families.

“I would like a home for myself and my son, but we will probably be pushed into a hub,” added Ms Hughes.

Mr Kenny said the hotel had a new owner, Riu Hotels and Resorts, which had new business plans.

“It’s a positive thing that tourists are flowing back into Dublin,” he said “We want fewer families in hotels. We have alternatives now, like hubs.”

He added: “The situation is different from a year ago. This would have been a big problem then. The situation is getting better,” he told RTÉ’s Morning Ireland. “We got good notice and all 14 families will be accommodated before the end of the month.”

A spokeswoman for the Dublin Regional Homeless Executive (DRHE) confirmed they were advised that the hotel “was not in a position to continue to provide accommodation” in November.

The Gresham Hotel was bought by the Spanish firm for around €92 million from the National Asset Management Agency last year.

“We are commencing a refurbishment of bedrooms and suites. This will necessitate taking a number of rooms out of the inventory for a number of months, which will reduce the hotel capacity,” the spokeswoman for Riu Hotels and Resorts said.

In July, the council granted planning permission to the hotel to convert existing offices and meeting rooms into 18 hotel bedrooms.

Anthony Flynn, head of voluntary group Inner City Helping Homeless, said the change in the hotel’s policy had been “on the cards for awhile.” Mr Flynn, who has been dealing with several of the families involved, said there was “a lot of upset” over the decision.

“We’ve spent far too long relying on hotels for emergency accommodation… Now that markets are on the up, hotels are willing to turn down DCC payments,” he said.

Mr Flynn said there was a fear that as demand for hotel rooms in the city continued to pick up, particularly around peak times such as St Patrick’s Day or music concerts, that more hotels would require the rooms currently provided to homeless families.