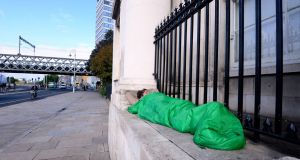 Homeless charities should be subject to “performance targets” to justify their annual State funding of more than €116 million, Housing Agency chairman Conor Skehan has said.

Mr Skehan, who will finish his six-year role with the agency in the New Year, said it was time to “scotch the lie” that homelessness could be ended, but to give individual housing charities specific tasks and targets to achieve each year.

Some 75 homeless charities operating nationally are in receipt of State funding of more than €116 million; 23 operate in Dublin alone, with 900 full-time employees.

“There is duplication between them all,” Mr Skehan said. “They need targets. There needs to be agreement that if there is this amount of money being spent, we expect to have a certain result come back for that expenditure.”

Asking individual charities to deal with different aspects of the homeless problem, such as rough sleeping, emergency accommodation, food provision, or health services – and assigning them goals to achieve in their particular area of specialism – would be a more effective way of dealing with the problem, he said.

Mr Skehan recently drew criticism from charities for saying that homelessness was “normal” and homeless numbers in Ireland were low by international standards.

“There will always be a night when someone ends up that way [sleeping rough] so instead of allowing ourselves be beaten up by this unattainable goal of ending homelessness, let’s decide what is a normal level of homelessness we will deal with, and not measure ourselves by numbers but by the performance – that is to say, the speed with which somebody who is a rough sleeper is identified, categorised and assigned a case officer,” he said. 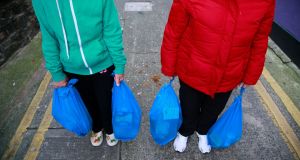 “We could deal with that. We accept there will always be a homeless person, but our target is the speed and efficiency with which we deal with that person.”

Achieving these performance targets and assigning responsibility for dealing with different aspects of the homelessness problem would not be helped by the misidentification of different types of homelessness, said Mr Skehan.

When a rough sleeper dies, they will be described as a “homeless person”, he said, even if they had a place to live, but were sleeping rough because of other issues, such as mental health problems or addiction. Many rough sleepers may only sleep outside for “one or two nights in their lives” or may periodically drift into homelessness because of these issues, he said.

“Then we’ve a huge population of beggars in the city who are not rough sleepers, but every single beggar has a placard in front of them saying ‘homeless – please help’. They’ve learned that works.”

Separately, he says, there are people in emergency accommodation who may or may not have ever slept rough, but for a variety or reasons have left their previous home.

“What makes me cross is watching the wilful conflation of those different things by people who for their own various reasons want to make the crisis appear to be, if not worse, certainly different than it actually it is.”

Francis Doherty, head of communications with the Peter McVerry Trust, said the Dublin Region Homeless Executive does track its performance.

“There are sectoral key performance indicators. Our performance is tracked in relation to providing key workers and support plans for people. We have no problem with benchmarking – you have to be accountable if you are in receipt of State funding.”

However, he said none of the trust’s adult homeless services were 100 per cent State-funded.

“If we relied solely on State funding our services wouldn’t be to a standard we would be happy with, so we are topping up every service.”