Over 500 people in need served Christmas dinner at RDS

Around 300 volunteers helped serve Christmas dinners and deliver food to those in need for the 93rd Annual Knights of St Columbanus Christmas Day dinner in Dublin today. Video: Hajar Akl 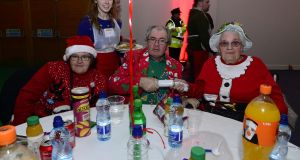 Eimear Larkin from Celbridge helping to serve Maria Byrne, James Byrne and Kathleen Byrne all from Dublin 7 at the Knights of St Columbanus Christmas dinner at the RDS. Photograph: Cyril Byrne/The Irish Times

Around 300 volunteers helped serve Christmas dinners and deliver food to those in need for the 93rd Annual Knights of St Columbanus Christmas Day dinner in Dublin today.

Gerald Harbinson, Supreme Knight of the Knights of St Columbanus since October, attended the dinner for the first time today.

“I’m just overwhelmed, to be honest with you, about the organisation, about meeting people and hearing some very, very sad stories.”

The organisers are prepared for 500 guests at the Royal Dublin Society (RDS), but will also be sending out 3,500 meals and 3,000 goody bags to the homes of the poor and homeless around Dublin.

Around 300 volunteers helped pack the goody bags, serve dinner and help with the overall organisation of the event.

Maria Donoghue, a volunteer who has been involved in the event for two years now, said it was something she always wanted to do.

“I suppose it’s a crisis that we have at the minute, and it’s nice to give back to society,” she said.

Aine McGoldrick from Omagh Co Tyrone was volunteering for the second year today.

“Very, very moving experience and very wonderful to experience the generosity and the goodwill of so many people to make Christmas day a special day for those who otherwise wouldn’t have a Christmas day,” she said.

One attendee, who wished to remain anonymous, said he had hoped things would have changed for him this year.

The man, who has been homeless for 12 years, said:

“The hardest thing about this time of year is being alone. I find that the hardest. . . You’re looking at everybody else going around happy go lucky. You try to keep a happy go lucky image, but inside you’re broken,” he said.

Towards the end of 2016, he said he had been very suicidal and tried to seek help but wasn’t very successful.

Despite “all the talk” about mental health, he said not much is actually being done about it.

“But people think suicide is a chicken’s way out, get into the position and see what it’s actually like. It’s a thin line. . . It’s like marriage, love and hate; it’s a very thin line.”

He said he tries to see the bright side of life when possible, even though it’s “not easy”.

“Those times when I have got suicidal feelings, I tried to just find that little, little flicker of light that’s there. It hasn’t always been there. And if it weren’t for other people, I wouldn’t have pulled through,” he said.

He has two daughters who he has not seen “for a long time.”

“I mean, today I feel very lonely,” he said, pausing as tears gathered in his eyes, “but that’s what it is.”

Sister Julie Doran, a member of Christmas Day Dinner committee, has been helping out for 12 years. She’s responsible for meeting and greeting all the guests.

“The whole effort of volunteers and guests, and the whole raport and that people are so focused on doing something worthwhile on Christmas day” is her favourite part of the event.

Tom Nolan, member of the Knights of St Colombanus’ Christmas Day dinner committee, said the Catholic organisation was set up about 100 years ago, and are spread up all around the country, but are “quite strong up in the North.”

Mr Nolan has been involved in the Christmas Day Dinner for 25 years, when it had started at the Mansion House. But around 10 years ago, they moved the event to the RDS as the Mansion House had become too small.

The contents of the goody bags are donated by a network of grocery shops the Knights have contact with. They each donate what they can.

On the day, around 500 guests were provided with a three-course meal of soup, traditional Christmas dinner, Christmas pudding, mild refreshments and entertainment. Free transport was also provided to and from the RDS.

The event, also attended by Archbishop of Dublin Diarmuid Martin, has been organised by the lay Catholic organisation every year since 1924 and it continues to see a significant increase in demand every year.

The Knights of St Columbanus is a Catholic organisation that started in 1915 in Belfast.