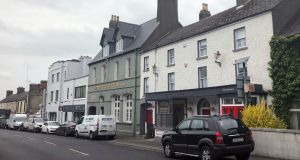 The Commercial Inn, Rathdowney, Co Laois. Most locals said they were not opposed to the accommodation centre but would have appreciated some advance notice. Photograph: Sorcha Pollak

On the road leading into Rathdowney, just before the Co Laois town’s large market square, sits a whitewashed building with a bright red door called the Commercial Inn. To locals, this building is also known as Peadar’s Inn, a former public house that temporarily opened as a coffee shop in 2017 before closing its doors earlier this year.

In April 2019 a post appeared on a local Facebook page claiming that a group of Syrian refugees were set to be housed in the town. A few days later a group of men and women moved into the Commercial Inn where refurbishments were still ongoing.

A couple of community members visited the premises offering to help after they discovered it was in fact being used as emergency accommodation for asylum seekers, while a local school dropped by information leaflets for parents. However, the lack of information around the cafe’s closure and the use of the building as an accommodation centre set the town’s rumour-mill ablaze.

Speaking at a Laois County Council meeting in April, Brendan Phelan, Independent councillor for Borris in Ossory-Mountmellick, argued that the Commercial Inn had never been used as a B&B and was in poor condition.

“It would not be suitable for accommodation,” Cllr Phelan later told The Irish Times. “Nobody realised there were people staying in the building until we saw them walking around. There was no consultation with the community. We don’t know what the conditions are like. There’s too much speculation around how many people are arriving and whether it will have an impact on schools and what supports have been put in place for these people. Rathdowney is a very welcoming place – all we want is clarity as to whether these people can work and get involved in the community.”

It’s a very traditional country town and people are afraid of change. They assume they’ll be swamped

In May, this journalist visited the centre and spoke briefly to the manager, who said information had been withheld from the local community only to protect the welfare of residents at the centre as there were concerns around racist and xenophobic remarks that appeared on social media platforms following their arrival.

Most locals said they were not opposed to the accommodation centre but would have appreciated some advance notice.

Gráinne, who runs a newsagents a few doors down from the centre, said the new arrivals were very friendly but worried whether they could settle into such a quiet place, particularly given the lack of public transport connections to Portlaoise and Dublin. She said one young girl from the centre often visited her shop to chat while looking at the sweets and toys. “It’s no life for a child,” she said. “Every child needs a garden to play in.”

Hanani from Zimbabwe, who is currently living at the centre, agreed that the infrequent bus service had made travel to Portlaoise almost impossible. She said residents in the Commercial Inn, who come from Somalia, Afghanistan, Palestine, South Africa, Nigeria and Malawi, had not been told how long they will remain in the town.

One local Rathdowney man, who preferred not to give his name, said even though most people outwardly claimed to support the new arrivals, many had expressed hesitation behind closed doors. “It’s a very traditional country town and people are afraid of change. They assume they’ll be swamped. They already believe it’s full of ‘foreigners’ with the meat factory. They aren’t happy about it.”

The same resident claimed that staff at the centre, who he said previously worked in the coffee shop, had not received sufficient training in how to support asylum seekers, many of whom would have suffered trauma. The manager did not follow up on offers of help from concerned members of the local community, he said, adding that plans were in train to hold a community welcome event for the centre’s residents.

Flodale Limited, the company that owns the Hibernian Hotel direct provision centre in Portlaoise, has also been contracted to run the emergency accommodation at the Commercial Inn. Asked to confirm how long the centre would remain open and what training had been provided to staff, company director Ian Skeffington told The Irish Times it was “imperative” that personal details of residents at the centre “are not aired or even hinted at”. He said it did not wish “to appear evasive” but asked that any queries be referred on to the Reception and Integration Agency (RIA).

A spokesman for the Department of Justice, on behalf of the RIA, said all people within the international protection process had the right to privacy and that the department could not comment on the use of any individual premises.

However, he did note that the accommodation at the Commercial Inn was “intended for a temporary period only” and that all parents with children of school-going age were receiving assistance with education-related queries.

More than 680 recently arrived asylum seekers, including 88 children, are currently residing in emergency accommodation across the country due to a lack of space in direct provision centres. A total of 19 B&Bs and hotels in Cavan, Dublin, Meath, Monaghan, Laois, Waterford and Wicklow are providing temporary beds to adults and children who have applied for protection in Ireland.

The number of asylum seekers in emergency accommodation has increased more than three-fold since December 2018 when there were 210 people in temporary beds. Some 6,096 people are living in the 39 direct provision centres across Ireland with capacity for 6,255. Some of these spaces cannot be used due to family configurations or medical needs of some residents.

Speaking before the Justice and Equality Oireachtas joint committee in May, head of the Irish Refugee Council Nick Henderson warned that accommodation options for asylum seekers had “worsened in recent months” and expressed “grave concern” that short term emergency solutions would become entrenched. He called on the State to procure more “fit-for-purpose” accommodation and said spending money on asylum seekers should be done “strategically to the benefit of people and the public”.