Using hotels for homeless families has ‘destructive impact’ on children 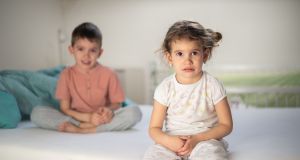 In 2018, a total of 850 families who were classed as homeless, including 1,926 children, were living in hotel accommodation in Dublin, according to the report. Photograph: iStock

Placing homeless families temporarily in hotel rooms is having a “destructive impact” on children and significantly affecting their mental and physical development, new research has found.

A year-long study into the effects of homelessness and life in emergency accommodation on families has warned of a “seismic impact” on people who are left unable to cook, do their laundry or take their children to school without expensive, time-consuming journeys across the city.

The research, which was conducted through interviews with 16 formerly homeless families who had spent time living in hotels in Dublin while awaiting permanent accommodation, found that not being able to cook led to higher expenditures, health implications due to lack of nutrition and reduced family social time.

All the families included in the study, which was published in The Geographical Journal, had become homeless because of eviction from the private rental sector, family breakdown or a combination of the two. One family included in the study had lived in a hotel for three years.

Researchers warned that the impact of emergency accommodation on children was particularly acute and noted that one toddler’s speech hadn’t developed since moving into the hotel, despite her being more than two years old and previously meeting development targets.

This speech delay could be a consequence of the trauma of homelessness, according to a behavioural specialist cited in the report. Other children were unable to learn to crawl or walk due to a lack of space in hotel rooms, it noted.

One participant in the study described how her son was referred to an early intervention team after he became a “kind of rigid baby” and was unable to climb or walk up stairs.

“They’re [the specialists] convinced that it’s down to where we lived, because he hadn’t got access to move around, to crawl, he never crawled . . . he had no space at all,” said the participant.

In 2018, a total of 850 families who were classed as homeless, including 1,926 children, were living in hotel accommodation in Dublin, according to the report.

The authors of the report, Dr Mel Nowicki (Oxford Brookes University), Prof Katherine Brickell (Royal Holloway, University of London) and Dr Ella Harris (Goldsmiths, University of London) noted that the rise of short-term lets via companies such as Airbnb had made it increasingly difficult for local councils across the Republic of Ireland and the United Kingdom to source social housing for people on the housing register.

They also warned that Dublin hotel owners were asking homeless residents to leave during busy times of year like St Patrick’s Day as they knew they could make more money through paying guests. The temporary housing of homeless families in hotels was not unique to Dublin and takes place across Ireland and the UK, they added.

“This research has really hammered home how terrifyingly easy it is to become homeless,” said author Dr Nowicki. “Everyone I interviewed just experienced a few bits of bad luck, or lacked a strong family support network.”

The long-term solution to homelessness lies in investment in affordable social housing and comprehensive regulation of the private rental sector, according to Dr Nowicki, who added that most people became homeless because of eviction, and tenants lacked security.