Cockroaches and mould among complaints about emergency housing

Cockroaches were found in ‘clothes and food’, according to one complainant 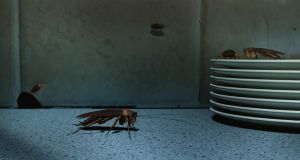 A complainant raised concerns about the impact of the cockroach infestation on his wife’s health. Photograph: iStock

Reports of cockroaches and anti-social behaviour were among concerns raised by people living in emergency accommodation in complaints made to the Dublin Region Housing Executive this year.

The 16 documented complaints made to the executive, which co-ordinates services across the four Dublin local authorities, were received between January and May and released to The Irish Times under the Freedom of Information Act. Personal details and names of the centres were redacted.

One complainant said his accommodation, which he shared with his wife, was “overrun with cockroaches” and he woke up in the morning.

“I feel disgusted,” he said. They were “in the bathroom” and in their “clothes and food”. He raised concerns about the impact of the infestation on his wife’s health.

“We can’t live like this any more,” he said. A report from pest control was redacted.

Another resident staying in emergency accommodation said her child was injured after falling out of a top bunk.

A project estate officer, who provides advice and assistance to residents, wrote: “She informed me that during the night her child had fallen out of the top bunk. She said there were no railings to prevent someone falling out. I saw a photo of the child and she had a swollen eye and bloodied nose.” The mother had taken the child to Temple Street hospital, he said.

He said he spoke to the family support team and was told the beds do have railings but they are detachable and sometimes families remove them.

“In this case, the mother did not mention to me that she had removed the railings, just that there was no railing,” he said. “There should not be an option to remove railings from top bunks where children are sleeping.”

The accommodation provider replied that cleaners must check every day that railings are not removed from bunk beds and that only over-sixes are allowed on top bunks.

An email from another project estate officer highlighted damp and mould issues in one of the rooms. He reported that a couple were “in a basement room full of damp and mould, which is aggravating her lung condition”.

At another centre a resident complained about having no key to the accommodation and having to wait around for staff to let residents in and out.

In response, the managers of the accommodation said: “We have made the decision to not give out room keys to each family after an initial trial period. Families were taking the keys and not returning them. We ended up needing locksmiths on a regular basis. We are providing emergency accommodation, and all residents arrive in the evenings and vacate in the morning, so we don’t feel it is necessary to give keys.”

Another resident living in emergency accommodation with her daughter for three years said she and her daughter’s life was “becoming unbearable”.

“Things have been stolen from my room, my home, that are irreplaceable. I appreciate the fact I have a roof over our heads. Unfortunately it’s unsanitary, demeaning and realistically outrageous,” she said.

“I am trying to stay strong and positive but it’s the hardest thing to do some days. I wear a mask for my child but underneath I feel broke.”

The Dublin Region Housing Executive said it and the four Dublin local authorities provide emergency accommodation for about 4,367 adults, which includes 1,275 families across the Dublin region.