Questionnaires cause ‘distress’ for people in direct provision 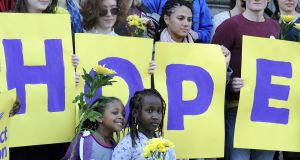 A protest outside the Department of Justice organised in conjunction with the Irish Refugee Council to mark the 15th anniversary of direct provision. File photograph: Dave Meehan

A “complicated” new application form is causing “extreme distress and confusion” for thousands of people in direct provision, groups working in the sector say.

Since early February, the International Protection Office (IPO), which replaced the Office of the Refugee Applications Commissioner, has been issuing 60-page questionnaires to people applying for refugee status or subsidiary protection, with advice that they should return it “if possible no later than 20 working days from the date of the covering letter”. It also advises them to get legal advice.

The forms have so far been issued to 3,000 people as part of the roll-out of the new “single application” procedure provided for in the International Protection Act 2015, which commenced on December 31st, 2016.

Those already in the system must transition to the new procedure, and the stage they are at in the old system dictates how they should fill in their application to the new one.

Groups such as the Movement of Asylum Seekers in Ireland (Masi) describe the forms as “overly complicated” and the manner in which they are being issued as “shambolic”.

Masi chairman Lucky Khambule said: “All over the country people are distressed and struggling with these forms. People are trying their best to fill them in and trying desperately to get advice on them without success.

“There are many conflicting bits of information circulating about what people should do because of the impossible deadline . . . While the deadline is not mandatory it is not clear to people in the [direct provision] centres.”

The Irish Refuge Council reports confusion and upset at the length and complexity of the forms and fears that without legal advice people may make mistakes that could cost them their right to remain.

The Refugee Legal Service, which is operated by the Legal Aid Board, said it had seen a “surge” in inquiries from people for help with the form. A spokeswoman said the board had established a panel of additional solicitors “to provide services to those granted legal aid” in response. “Asylum cases are treated on a priority basis,” she said.

Council of State member Ruairí McKiernan, who works with asylum seekers, said the “high level of chaos” being spread among “vulnerable people shows a clear disregard for their wellbeing.” He called on the IPO to “state clearly there will be no adverse consequences to people from this failure in communication”.

A spokesman for the Department of Justice said: “As is clearly stated on the form, applicants are requested to respond within 20 working days, if possible.”

There was no suggestion that a failure to meet the deadline would result in applications being disregarded or otherwise disadvantage the applicant, he said.