‘Poor progress’ in Ireland compared to other EU countries 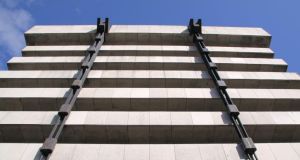 Central Bank in Dublin: the economy, society and environment were assessed by Social Justice Ireland

Ireland is making “poor progress” in the economy, society and environment compared to other EU countries, according to a study by Social Justice Ireland (SJI).

The research shows Ireland ranks 11th overall on the Sustainable Progress Index against 14 other EU countries. The index, due to be published on Wednesday, has been developed to show how Ireland is performing on the United Nations sustainable development goals. The 17 goals were divided into three sub groups: economy, society and environment.

Michelle Murphy, research and policy analyst for SJI, said the rankings helped show why many Irish people did not believe there had been “sufficient real progress” in recent years.

“On the economy Ireland has slipped from sixth in 2006 to 10th in 2014, the latest year for which data is available, despite an excellent performance in GDP growth,” she said.

“These results show that despite huge austerity, rapidly growing GDP and improving employment statistics, Ireland has a long way to go before it reaches the level of development and fairness to which most Irish people aspire,” he said.