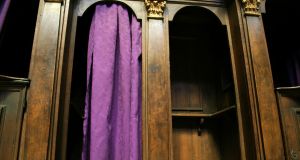 Fr Iggy O’Donovan said it was “a great pity that in Irish Catholicism the only sin was sex” as “there are few greater positives than a good confessor”. Photograph: Getty Images

Regular confessions by Irish Catholics came to an end sometime in the 1970s and accompanied the death of the sense of sex as sin, a Limerick-based Augustinian priest has said.

Fr Iggy O’Donovan said that, following independence, “throne and altar conspired to create an atmosphere of anti-sexual terrorism, as also evidenced in the censorship laws of the time where the only sin, too, was sex.

“The day the Irish people threw off those shackles was the day confession collapsed,” he said. “Confession in the traditional sense is dying, and I am glad of it.”

Fr O’Donovan said it was “a great pity that in Irish Catholicism the only sin was sex” as “there are few greater positives than a good confessor”.

He has been hearing confession regularly since he arrived in Limerick four years ago and said the young people who attended these days were predominantly foreign nationals.

Fr O’Donovan made his remarks after priests at the Galway novena this week said confession was making a comeback. A Redemptorist priest there, Fr Clement MacMánuis, said he was struck by the number of people who said they had been going to confession more regularly.

“Some people . . . don’t want or can’t afford to be waiting for counsellors or psychiatrists,” he said. “They don’t want labels, they want to be treated as normal . . . The confessional is somewhere they can find a little reassurance.”

Reports of queues outside confessional stalls in Galway’s Cathedral appeared to bear out his observations.

However, Fr O’Donovan felt developments such as the Galway novena experiences were “glitches”. Redemptorist priest Fr Gerry O’Connor, who is now based in Cork after many years in Cherry Orchard parish in Dublin, said he agreed with Fr O’Donovan.

“In working class Dublin there is no uptake whatsoever,” he said of confession.

He said people engaged at the time of special events such as novenas, pilgrimages or when visiting shrines but not throughout the year.

Fr O’Connor said in his experience Pope Francis’s call to people to return to the sacrament had caused “no upswing”.

However, the administrator of Dublin’s Pro Cathedral said numbers attending there were strong, with confessions being heard twice a day six days a week. Canon Damian O’Reilly said the anonymity of being an inner city centre parish was probably a factor, as well as the volume of people passing by. He has noted an increase in attendances since Pope Francis was appointed in March 2013.

In Monkstown, Co Dublin, parish priest Fr Michael Coady said he had not noticed any major change in attendances. “It hasn’t gone up. It hasn’t gone down,” he said.

Fr Coady suggested the experience was probably different at “through-put parishes” such as nearby Dún Laoghaire and in Dublin city centre where there would be a larger and more regular footfall.

In rural Mayo, Fr Brendan Hoban, parish priest of Moygownagh near Ballina, said confession there had “disappeared for most of the year except for Christmas and Easter”.

He was available to parishioners at any time they wanted he said, but: “I could count on the fingers of one hand the number of confessions I have heard apart from Christmas and Easter.”