A unique artistic expression, a Vocal Oratorio of the UN Principles for Older Persons has been launched in Dublin. The brainchild of Independent Senator Marie-Louise O’Donnell, the Elders of Ireland Vocal Oratorio will be performed in a years time. 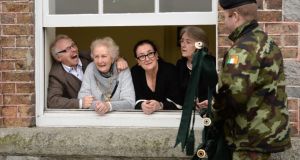 Paddy Jackson, Mai Quaid, Marie-Louise O’Donnell and Mary Daly with Cpl Anthony Kelly of the Defence School of Music at the launch of The Elders of Ireland Chorus. Photograph: Dara Mac Dónaill 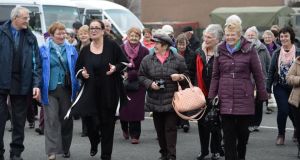 The corridors of the Michael Collins club at Dublin’s Cathal Brugha Barracks echo with the voices of Ireland’s older generations on Monday morning as nearly 200 people gather to celebrate the voices of the Elders of Ireland.

Busloads of participants from across Ireland pull into the historical grounds at the Dublin army barracks to take part in the Elders of Ireland Chorus, which aims to provide a platform for older people in Irish society “to speak up and to speak out”.

The main hall at the Michael Collins club is alive with chatter as Senator Marie-Louise O’Donnell, the organiser of this “vocal journey”, calls for audience attention. Her aim, she explains, is to explore and examine the language of the United Nations Principles for Older Persons.

“In one year we will perform these UN principles as a vocal oratorio using all our voices, all our intonations, our timbres, our dialects, our stresses, all our accents,” explains Ms O’Donnell before adding that the morning will be dedicated to voice projection and vocal development.

A number of participants shift uncomfortably in their seats as Ms O’Donnell, a former lecturer in Irish drama, culture and language, calls on the group to use their vocal chords to recreate sea and animal sounds. When she makes the noise of a creaking door, a woman in the back row turns to her friend and mumbles “the white coats will be here for us soon”.

Within 10 minutes, however, the large hall is filled with the voices of men and women enthusiastically calling out the main principles of the UN charter.

“Your voice is an instrument,” Ms O’Donnell says as nearly 200 voices recreate the sound of rainwater falling softly on the pavement. “We have voices from all over Ireland and they’re beautiful. You just need to project them.”

Ms O’Donnell formed the 2017 Elders of Ireland Chorus as a means of highlighting the needs of older members of our society and the importance of their participation in society.

“This vocal oratorio is an opportunity for the voices of our elders to take centre stage around these [UN] principles,” she says. “These are the voices that we as a society may have forgotten to listen to.

“The Elders of Ireland Chorus is about giving people a voice. Their voice. The human voice is ageless and is capable of so much.

“I believe that whether you are 70, 80, 90 years of age, you still have the extraordinary power of creativity and energy. You have life. You are passionate about life. You have expression and imagination and the energy to keep going.”

Participants in the Chorus project will rehearse once a month in Dublin over the next year in preparation for a performance of the UN Principles for Older Person in 2018 to mark the 70th anniversary of the adoption of the UN Declaration of Human Rights.

Groups from across Ireland, including Ballinasloe, Castlebar, Tullow, Shannon, Multyfarnham, Ballinafid, Clondalkin, Blanchardstown and Tallaght as well as members of Men’s Sheds in Dundalk, Cooley and Kilcock, will take part in the project which Ms O’Donnell says will reveal the “character, truth and wisdom” of the aged in our society.