Protesters in Dublin call for end to direct provision ‘hell’ 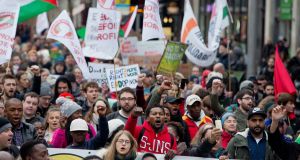 Protesters outside the Garden of Remembrance in Dublin during a demonstration calling for the end to the direct provision system. Photograph: Tom Honan.

Hundreds of people from across the State and Northern Ireland marched in Dublin on Saturday calling for an end to deportations and the direct provision system of accommodating asylum seekers.

Direct provision was introduced in April 2000 and sees asylum seekers accommodated in privately-operated centres, and provided with meals and a weekly allowance of €21.60 – for children and adults.

Among those who spoke at the protest before it set off from the Garden of Remembrance, was Mavis (who did not wish to give her surname) who has lived in a direct provision centre in Dublin for 15 months with her three children.

“For me every day is a struggle, to watch my children suffering and getting sick. I wish one day somebody, an Irish citizen would go into my life for one week and they would know what a hell it is. I don’t even have words. Waiting and waiting for a decision is one of the hardest things a mother can do. What can we do? We have to pray and hope.”

People Before Profit TD Bríd Smith said it was “extraordinary” the lengths the Government went to “prevent people making a life for themselves”. She was one of several speakers who criticised Government plans to restrict asylum seekers’ right to work when the measure is introduced.

The Government recently approved plans to introduce the right to work for asylum seekers to bring the law into line with a Supreme Court judgment that the current absolute ban on the right to work was unconstitutional.

Among the restrictions around the new right however will be that a person must be in the asylum system for nine months and may not work if they are appealing a decision.

Lucky Khambule of the Movement of Asylum Seekers in Ireland said the restrictions amounted to a denial of a right to work.

“Most of the people who are asylum applicants are already at appeal stage. So who is going to be able to work? We want meaningful rights.”

Among the groups at the protest were the Anti-Racism Network, United Against Racism, Students Together with Asylum Seekers and Refugees, Rosa (Reproductive rights, against Oppression, Sexism and Austerity), the Ireland Palestine Solidarity Campaign, as well as political parties People Before Profit and Solidarity.

Protesters marched from Parnell Square to City Hall on Dame Street, chanting such slogans as, “No hate. No fear. Refugees are welcome here” and “No nations. No borders. No nations. Stop deportations”.