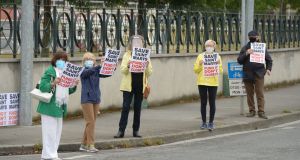 Protesters outside St Mary’s care home on Dublin’s Merrion Road protesting against the possible sale and closure of the facility. Photograph: Alan Betson

Elderly residents of a south Dublin nursing home due to close by the end of the year, have been “in tears”, according to staff who took part in a protest on Friday against the closure.

Some of the residents have been living at St Mary’s (Telford) on Merrion Road for more than 60 years, since they were children at a school located there for the visually impaired, relatives say.

Family members, volunteers and some staff at the 152-year old home took part in a socially-distant protest calling on the Health Service Executive to take the home over. They say with new management and investment it could be saved.

Originally St Mary’s Asylum for Female Blind, it was founded by the Sisters of Charity in 1868 as a school and home for visually-impaired girls and women. The nuns own the land and the home is run according to their ethos but they have not managed it since 1996. A member of the congregation sits on the board.

The home can accommodate up to 58 residents though it is currently home to 35 elderly women.

The board announced last week the home would close as it could not meet statutory and regulatory requirements to run the facility at full capacity, and could not afford to meet them.

The two most recent Hiqa reports, published in 2017 and 2019, were critical of governance and management at the facility and the lack of space and privacy in one unit.

The 2019 report notes: “Inspectors were told by the person in charge that there were resources ringfenced for improvements to the centre’s premises as required to meet regulatory breaches identified in the centre’s previous reports.”

It says: “The centre’s financial resources had not been used to enhance the environment and improve the quality of life of residents.”

About 10 staff, who did not want to be named, stood apart from the protest, some explaining they were “scared” to be part of it and were waiting for their union, Siptu, to meet management on Monday before becoming publicly involved in the “Save St Mary’s” campaign.

A number said they believed management had been “winding down the home for several years” with the intention of closing it.

Shay Ryan, communities co-ordinator in the home, had spent much of the morning trying to reassure distressed residents.

“I took one lady for a walk this morning who has been living in St Mary’s for 60 years. She is blind, in a wheelchair and she’s scared. She’s angry as well. It’s hard to reassure them though because the only information we’re getting is that it is going to close.”

In a statement St Mary’s (Telford) said: “We want to reassure our staff, residents and their families that the closure will take place on a planned and organised basis over the necessary period of time in consultation with the HSE.”

The HSE, which provides €34 million a year to St Mary’s, is seeking a meeting with the board.