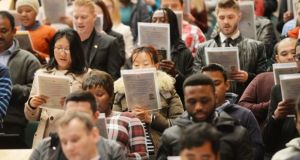 Delays in the processing of applications, expensive fees and a lack of clarity around eligibility conditions are among a number of concerns raised in a new report examining Ireland’s citizenship process.

The Economic and Social Research Institute (ESRI) Pathways to Citizenship report also raises concern around the barriers facing children applying for citizenship before they turn 18 and the lack of an appeal mechanism for people whose applications are declined.

The ESRI report found applicants for Irish citizenship face “more favourable conditions” than in other EU member states including not having to renounce their former nationality or undertake a language or civics test.

However, the lack of clarity around the requirement that a person must be of “good character” to qualify for citizenship “gives rise to uncertainty”, said the report. Ireland’s naturalisation application and certification fees are also “among the highest in the EU”.

The number of applications for Irish citizenship “jumped significantly” between 2008 and 2011, reflecting the rise in numbers who immigrated to Ireland in the early 2000s, reports the ESRI.

While most people who apply are non-EU nationals, the number of EU citizens applying has increased in recent years.

People from Nigeria, India, the Philippines, Pakistan the US and China make up the highest number of applications from non-EU nationals and people from Poland, Romania, the UK, Latvia, Hungary and Lithuania are the most common EU nationalities to apply.

The number of UK citizens who acquired Irish citizenship increased seven fold in the two years following the Brexit referendum, rising from 98 naturalisations in 2016 to 687 in 2018.

In October 2020 the Department of Justice said it should take 12 months for a “straightforward application” to be processed following delays arising from the 2019 High Court judgement and Covid-19 restrictions.

The High Court’s ruling last year that any person applying for Irish citizenship could not spend a day outside Ireland in the year before they apply resulted in “significant delays” in the system, notes the report.

The “six week rule”, which provides for short term absences from Ireland during the year of continuous residence needed to apply for citizenship, was found to be unlawful in July 2019 by Mr Justice Max Barrett.

However, the Court of Appeal found in November 2019 that his judgement was “unworkable, overly literal, unduly rigid and gives rise to an absurdity”, says the report.

Applicants for Irish citizenship must have a total reckonable residence of five years during the previous nine years, including one year of “continuous residence”.

Applying for citizenship costs €175 and if granted, adults must pay €950 for their certificate while children and widow/widowers of an Irish citizen pay €200. Refugees and stateless persons are exempt from paying this fee.

Applicants must also be of “good character” – a term that is “not defined” and has no published “guidelines on its interpretation”, notes the report. While application refusals are generally low, the rejection rate increased from 6 per cent to 15 per cent in 2018 when 1,243 applications were refused. Just five people have had their Irish citizenship revoked in the past decade.