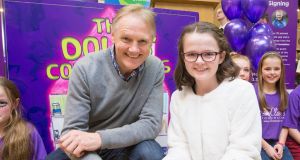 Author Keeva Heffernan (12) with Ireland rugby coach Joe Schmidt on Monday. All proceeds from her book, The Dolls’ Complaints, will go to the charity Cliona’s Foundation. Photograph: Liam Burke/Press 22

Schmidt did not address speculation that he is retiring as Irish rugby coach after the 2019 rugby World Cup for family reasons, though he did talk about his experience of coping with his 15-year-old son Luke’s severe epilepsy condition.

Schmidt appeared as a guest in Limerick on Monday where he signed copies of charity book The Dolls’ Complaints, written by Keeva Delaney (11).

All proceeds from the book will go towards Cliona’s Foundation, which gives financial support to families of children with complex care needs.

“It’s pretty traumatic for kids. They feel pretty isolated when they are in a hospital ward by themselves, and it’s traumatic for the parents as well – they feel isolated from their kids if they can’t be there with them,” Schmidt said.

“Having been in the situation ourselves it always makes it a little bit more personal when you’re supporting a charity like this one.”

Schmidt initially stopped short of offering advice to other families in similar or worse situations, but paid special tribute to his wife, Kellie, for her dedication to their son Luke.

“No, you’re speaking to the wrong person... I just go to work, but my wife has done an unbelievable job in keeping the family together as well as looking after Luke.”

“We’ve got three other kids and what has really helped us is that Luke has been incredibly resilient.”

“He stays incredibly positive despite the number of times that he has had to be in and out of hospital.”

Schmidt added: “I think the advice would be to keep [your children] close and keep [their illness] as normal as you can. Routine is a friend and it keeps things ticking over, and it allows them to stay positive.”

He stressed that being “open” about the situation can help, and added this had helped his own family remain positive about Luke’s condition.

“Try to keep things as open as you can as well. We would have, for a long time, not said anything about [the] trials and tribulations we’ve had, just because it’s a family matter.”

“But, a problem shared can be halved, because people have been incredibly supportive of us.”