Society must maintain a sense of solidarity in order to achieve a better future, he says

President Michael D Higgins highlights the plight of migrants and the disadvantaged during his annual Christmas address. Video: Áras an Uachtaráin 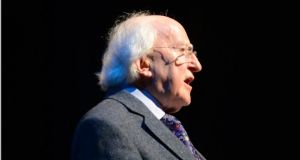 President Michael D Higgins: “Our solidarity is the heart beat of our society. Our bonds are stronger than we think, and stronger than that which at times divides us.” Photograph: Dara Mac Donaill

President Michael D Higgins has used his annual Christmas message to sound a warning note about “new forces” in society seeking to utilise hate and racism.

Mr Higgins touched on the ongoing global refugee crisis, “horrific violence and suffering” in the Midde East and the uncertainty caused by Brexit in a video address to the Irish public released on Wednesday.

The message had a heavy focus on external matters, and he drew on similarities between the story of the birth of Christ with its themes of “forced migration, homelessness and powerlessness” and the current hardships being endured by humans across the world.

“This story should resonate to us in our present world and circumstances, holding, as it does, a message for all of us, regardless of our circumstances or faith. A message of challenge to moral action, one of optimism in our capacities for a new beginning, and it is a message of peace,” he said.

“As this year ends and a new one begins, the dream of ‘Peace on Earth’ can seem very distant.

“In the past year, we have witnessed horrific violence and suffering in countries such as Syria, Yemen and Iraq but also closer to home in Istanbul, Nice, Brussels and in so many other towns and cities.”

The President also made reference to the celebrations around the centenary of the Easter Rising, saying we “celebrated elements of our past that can provide us with a lasting source of pride and confidence, as well as a compass for the future.”

He concluded with a wish that Irish citizens will continue to “build the true republic of which our forebears dreamt”, saying that society must maintain a sense of solidarity in order to achieve a better future.

“Now new forces seek to exploit old divisions or create new ones, utilising even the hate of racism and ethnic exclusion. Our solidarity is the heart beat of our society. Our bonds are stronger than we think, and stronger than that which at times divides us,” he said.