Glen Hansard and Christy Dignam played in support of Apollo House that is being occupied by housing activists and homeless people. 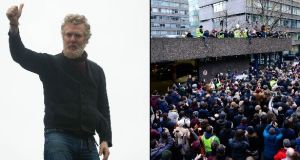 Glen Hansard salutes the crowd from Apollo House, which has been taken over by Home Sweet Home to shelter the homeless. Photographs: Cyril Byrne

The former owner of Apollo House says he supports the aims of Home Sweet Home, a group of housing activist who have occupied the vacant office building since Thursday, to accommodate rough sleepers. Property developer Garrett Kelleher controlled Shelbourne Developments which included the building in its portfolio of loans until 2014.

He said “nobody” should be homeless this Christmas and it was “heartwarming that so many people really care” about the homelessness crisis. “People have been squatting in vacant property for generations,” he said. “The receivers for Apollo and Nama should seek to immediately do what they can to help, not allow this to become a political football but actually help, have their lawyers down tools and do the right thing.”

Mr Kelleher, who is based in Chicago, said he became aware of the occupation through the media. He said he had not been in the building for three years.

Thirty-five people slept in the building on Monday night, according to Home Sweet Home spokeswoman Rosi Leonard. She rejected suggestions that the group had refused to meet receivers Mazars, saying they wanted to co-operate. Another spokesman said “solicitors” were in communication and a meeting was expected later this week.

There were now two fully-fitted kitchens and showers had been installed in the building, where they planned to be over Christmas, Ms Leonard said.

Up to 1,000 people gathered for a free gig in support of Home Sweet Home at Apollo House on Tuesday. Gardaí closed off the small street shortly before 1pm as singers Glen Hansard, Hozier, Liam Ó Maonlaí, Christy Dignam and the band Kodaline arrived at the building.

Hansard sang first from a small raised platform on the street, in front of the side gate into Apollo House, performing Woody Guthrie’s This Land Is your Land before being joined by Christy Dignam who delivered a performance of his band Aslan’s Crazy World. A number of former rough sleepers, who spent Monday night in Apollo House, watched from a roof above the ground floor over the car park.

Director Jim Sheridan joined in a performance of The Auld Triangle, followed by Kodaline singing Bob Dylan’s The Times They are a-Changing and their own tracks, High Hopes and All I Want. Hozier performed his hit Take Me To Church.

Volunteers passed through the crowd with buckets seeking donations towards the running costs of the project.

During the gig, Dean Scurry of the Home Sweet Home project, spoke of the need to end poverty and homelessness, with “people plus love”. He said Home Sweet Home and Apollo House were symbols of “freedom, hope, love, nourishment and respect”.

Among those present for the impromptu concert was Martina Balfe, who works in the GPO. She said she had come to “show support to the homeless”, adding “it’s a duty of everyone to be concerned about this”.

Julia Woods, Steve Woods and Shirley Kenny travelled from Athlone. “It’s a great cause and it’s really important to show solidarity and support,” said Mr Woods. Éanna Gordon, a student, said he was pleased to see the “movement” was “popular and growing”. “This has two purposes – a practical one to give shelter to homeless people and as well to draw attention to the issue. That’s a good thing,” he said.