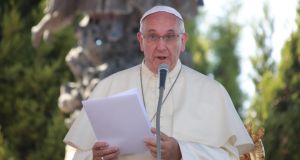 Irish clerical child abuse survivor Mark Vincent Healy (54) told Pope Francis (above) of his concerns about rates of self-harm and suicide among survivors during a meeting in the Vatican today. Photograph: Nicola Lanese/EPA.

The second Irish clerical child abuse survivor to meet Pope Francis this morning was Dubliner Mark Vincent Healy (54). The meeting lasted for approximately 45 minutes and the only other person present was Cardinal Seán O’Malley, who acted as translator.

In March 2009, Spiritan/Holy Ghost priest Fr Henry Maloney pleaded guilty in the Circuit Criminal Court to abusing Mr Healy and the late Paul Daly when both were pupils at St Marys College in Dublin’s Rathmines between 1969 and 1973.

He was given a suspended sentence due to ill health and as he was already under strict supervision at Kimmage Manor in Dublin, where he has been since.

Out of ministry and under supervision since 1996, in 2000 Maloney was sentenced to 18 months’ imprisonment for sexually assaulting two other boys at St Mary’s in the early 1970s. He served 15 months.

The Spiritan Congregation, formerly known as the the Holy Ghost Fathers, runs some of Ireland leading schools including Blackrock College, St Michael’s, St Mary’s and Templeogue College in Dublin, and Rockwell College in Co Tipperary.

Mr Healy subsequently helped expose allegations of child sex abuse involving Maloney and other Spiritan priests in Africa and Canada as well as in Ireland.

Its report, published in September 2012, found that there were unacceptable failures over several decades to protect children from at least 47 alleged abusing Holy Ghost priests in its schools in Ireland. It also found that suspected abusers were often moved by the congregation, either within Ireland or abroad, provoking concern that other victims had yet to come forward.

Mr Healy said he had been contacted about meeting Pope Francis about five weeks ago Archbishop of Dublin Diarmuid Martin and, since arriving in Rome on Friday, he too had been staying at the Pope’s Santa Marta residence.

He told The Irish Times he had presented the Pope with a folder which was in three sections and about which he spoke.

The first concerned “self harming and suicide among abuse victims and the necessity for the provision of a safe space for such people.” He pointed out that to date in the church “the focus has been on protection rather than provision of help to those abused.”

On the numbers of such abused people he told Pope Francis “we don’t even know the extent of it. We’ve got to go out and get to those people now.” There must be “a move from policy, meetings and talk, to action, to truth and towards bringing priests and bishops to account,” he said.

He told the Pope he had the support of Minister for State at the Department of Health Kathleen Lynch for the provision of a safe space for the abused in Ireland, following meetings with her.

The second matter he discussed concerned what he believes is under-reporting of abuse cases by church authorities when it comes to NBSC audits on child protection. Mr Healy said Pope Francis seemed “quite shocked” at some of the figures he produced.

The last of his three main points concerned his own case and the difficulties he was having in bringing it to a conclusion with the Spiritans.

Mr Healy is to return to Ireland this evening.