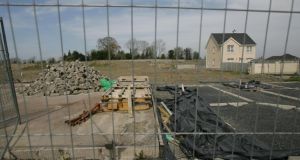 Planning permission was granted for 2,754 houses in the fourth quarter of 2015. Photograph: Bryan O’Brien

the fourth quarter of last year was almost twice that of the same period in 2014, latest figures show.

The figures from the Central Statistics Office say permission was granted for 4,017 homes, compared with 2,057 for the same period in 2014, representing an increase of 95.3 per cent.

One-off houses accounted for 22.7 per cent of all new homes granted planning permission in this quarter.

The total number of planning permissions granted for all developments was 4,470. This compares with 3,504 in the fourth quarter of 2014, an increase of 27.6 per cent

Planning permissions for new buildings for agriculture went up to 420 in the final months of last year. This compares to 165 permissions in the same quarter of 2014.

An analyst from Davy said, “While these permissions may not all translate into housing starts and could unwind again in Q1 2016, the data is perhaps a signal of a belated pick-up in house-building activity.